Behold, the power of dementia in the right mental hands...

Summary: No matter how bad your surroundings are, any dementia patient still in the MCI has the ability to create and slip away to their very own customized safe room/house. Safe from the chaos, safe from the virus, safe from the idiocy. Best part is anyone can do it with even a little practice plus this is one of those feats that your dementia will actually make easier.

Hi, my name is Jeff Cobb, I have Lewy Body Dementia, and I am here to tell you that if used properly, dementia can be some powerful-assed shit.  Call it what you want, let me tell you what I did yesterday:

Due to the Corona virus pandemic I stayed indoors, thought ALOT about washing hands, surfaces, etc until I saw one dog licking his butt and the other dog licking my hands. What's the point. Seriously though, it was a day spent as I think many Americans did, tension followed by monotony followed by moments of disbelief at the idiocy of my own government above the State level, then depression that the dispensaries are shutting down making a hard to get med harder to get.  Combating those negative feelings are the ideas that because we were anti-social nerds all of our lives we were accidentally prepared for all this, having the gypsy lifestyle of a hired coder in the 90's we got used to taking our world with us so our entire library of books, photographs, music, movies and TV, all of it has been digitized for 20 years. Every rented movie, TV show, everything was backed up and cataloged as we have been watching all this time. Now Netflix can burn down (hope they don't), Hulu, Comcast, they could all end tomorrow and my viewing would be no different than it is now: great.

But these are the trappings of your reality, for you this paints the picture of my environment.  And for yesterday, you would be right.

Today on the other hand I realized as "good" as this was, as of 08:00am my day was as good as it was going to get all day long.  Thing is, that was yesterday too and while yesterday wasn't horrible exactly, I wish today would somehow suck less. However after looking at my available options for the day, things looked grim.  Not that there was no chance things will be better; more like there was 99.999% chance today would be no different from yesterday. Folks don't get the difference between hopelessness and the absence of hope. To me, the dementia patient, hopelessness is the one nearer to depression, thinking all is lost, the whole future only looks bleak. The absence of hope (which I have today) is merely the pragmatic acceptance of the fact that nothing better is likely to happen and pining away for something unlikely to happen is a fools' errand.

Realizing and accepting something cool wasn't going to just drop into my lap today I decided to take things into my own two mental hands. I have discussed before what my mental safe room was like, how it was getting easier and easier to slip off there and in general I had it so if faced with something unpleasant in the doctors office for example, I could mentally change the channel and be off hanging out in "my place' the whole time.

Do you know what? Even in this Corona virus pandemic not only has nothing changed but when everywhere you turn you find fear, paranoia, depression and anger, having that place is a real sanity saver.

What I get asked most often is what its like there, what do things look like. What is it "like" there. And the truest answer I can give is the one that pisses people off the most: that place becomes what I need it to be.  Why tell you all that? Simply because today is a perfect example of that in action. Normally my place is one of respite, refuge, calm and peace and quiet, something I need from today's world from time to time. That said, its always been that with very little variation.

Until now. For the sake of the readers of this some time in the future, whats going on right now is the corona virus is ripping through the entire world at a frightening rate (nobody believes the Russians bullshit about having no corona virus deaths, only an unexpected shit-ton of pneumonia cases).

So with all this starting to look like a Ground Hog Day of yesterday, I burned a fatty of my White Widow, leaned back in my chair and let my mind go to my place. I never direct it as in "I need to quiet place" or "I need an interesting place to waste some time", I just go and not only find what I need there, I need what I find there as well.

So jetting off to Jeffs place today took a surprising turn: when I finished breakfast it was clear the day was on its way to being what passes for normal now I got comfortable and I "went." My current best-of-breed strategy for doing this uses one of the "features" of LBD, the Parkinsons like symptoms known as "frozen stance" or where the patient seems frozen in a position, usually unable to move. When it happened to me I realized it wasn't that I was constrained or constricted to a spot or stance but rather the messages from my brain to my extremities is simply shut down and when that happens, I am often like a puppet on a string with no puppet master. This can be frustrating if you are doing something but if not, if you are just hanging out, this leaves you (me) in the perfect mental space to fully disassociate from my body to slip easily to my domain. 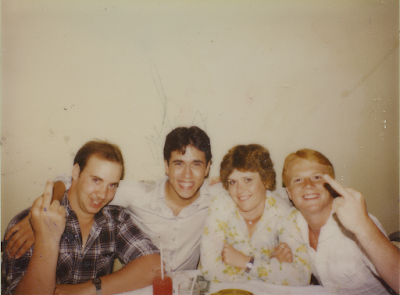 The hero of our story (2nd left) age 18 (barely) with three amigos in Goodfellow AFB tx, 1979. Left to right: (unk name) room mate at the time, myself about 9 weeks after my 18th birthday, (unk name) girl I almost married twice and Mike....Mike...something I swore over a bottle of 151 I would never forget. Some brother.

When I get there today, its not the usual place; in fact it was about as opposite the usual place as I could have imagined, because it took me back to a military bar in San Angelo Texas. It was the Non-commissioned Officers bar at Goodfellow AFB. The year was 1979; I was just turned 18, just graduated BASIC training and was now at an Air Force base in Texas to learn the trade of SIGINT or Signal Intelligence. Coors beer was 35 cents a can; the most expensive mixed drink in the house ran you less than three bucks. The NCO club had it all: a huge bar area complete with dance floor and bandstand, full kitchen and dining area and full DJ rig as well. Cheap food, cheap liquor, cheaply played music all conspired to keep us cheap people happy and content.

And fun was had there, it just couldn't help it. The music made us dance, we made each other forget the cares of the day or more to the point, the school. The intelligence school at Goodfellow AFB was a real brain-burner and responsible for burning out many a promising young mind. Stressful doesn't begin to cover it so after hours, we went nuts. In many ways it was like MASH on TV in that there was 1 man to 5 women there (thats just how the training numbers worked), the food was good, the beer was so cheap it was nearly free and for many of us, this was our first time living fully unsupervised away from home and we were ready to raise some hell.


Here I was....again. Its really a weird trip because I was suddenly and completely convincingly in that place and time, so many things were instantly familiar and not really comforting but exciting in a way. You know that pang of excitement in your gut when as a much younger person you anticipate a potential evenings entertainment.

Yet for as familiar as everything seemed I could not name one person there. I "knew" many but to name them was something not in my skill set.  So I sat at the bar and enjoyed the rest of them enjoying what we enjoyed at 18, in that time and at that place. No idea how long I stayed; DJ went through a complete playlist, maybe a dozen and a half pop tunes of the time.  I can still hear that rap song, like the first one there was, man going on about Holiday Inn. The beer tasted good but empty, could be a product of the dementia or a product of the fact that IMO, Coors was never as great as "Coors" was.

Still, it was as fun today as it was in 1979. I got to spend the day in a place where all was right in the (my) universe. Who else can say that?

So the place seems to provide what I need, when I need it. Now that I know the trick for going, there seems to be no situation in the so-called real-world that cannot be made better by a trip there.

I wish I could teach every person in the world with dementia how to do this, how easy it is. How useful it is. You guys may be stuck at home but I sure as hell am not....now I can't wait to see what tomorrow brings...