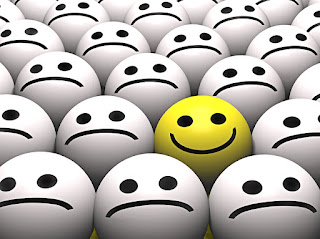 Sometimes I wonder whats wrong with me. I mean I know I have dementia and LBD to be specific  but I mean I don't seem to be reacting to this dementia business the way I am supposed to be. I recently found myself on Twitter, much to my great surprise. I was thought that I would rather pound my balls flat with a meat tenderizer than spend any time on Twitter for any reason I could think of. Thats been my attitude ever since 2008 or so and I was working at Sony on the first XPeria phones which really went overboard with integrating social media of the time. Two of the bigs at the time tha tare still going were Facebook and Twitter. One of the guiding principles of product dev at Sony was you ate your own dog-food, so to speak. In other words as much as I found Facebook, Twitter and at the time MySpace to be a waste of brain cells and once the product was released (and I left Sony for a sabbatical of sorts) I never touched either again for over a decade.

Now as my dementia has gotten worse, things like social media in general have as a rule been too stressful for me. In the case of this blog, well, lets just say I am not worried about being overwhelmed by visitors. As I have said elsewhere, Randy and I treat this place as document storage anyways and when we have a "spike" in users (like we have 20 instead of 2) its cause for celebration of a most sarcastic sort.

Now one thing about my LBD is that I live in one of two states: slightly-stupid version of my old self with some cognitive impairment and fogged-in when I can barely understand anything happening around me, can't talk, have problems walking, can't understand video games, TV, certainly not the computer.. Now in that state, the damage is obvious and being as memory is a part of that, when in a down state I cannot recall what happened in the up-state, whereas in an upstate, everything that went on in my head is clear as a bell to me from the previous cycle.

I said all that to explain why I was puzzled/pissed when I woke up some weeks ago and found Twitter notices in my mailbox, I check it out and sure as shit the previous night I had signed up for an account. I know I did it because when I tried to log-in to see what happened, one of my go-to (but throw-away) passwords worked. So I figured since I had it I might try to find some other dementia patients in my same spot to maybe share notes.  Also as corny as it sounded, there are a few famous people who apparently frequently Twitter that are associated with dementia and related areas as far as support. I thought maybe (no actual clue how) I might get their attention. I don't know...but there it was.

One thing being there taught me though was that I am clearly not like other dementia patients. I thought I had seen the gamut of possible permutations as to how people react to this but being around Twitter and watching some full-time dementia patients....this isn't to take anything away from them.  In fact, anyone reading this, please understand I have aphasia and stuff gets tangled on the way out. And part of aphasia is sometimes stating things at their simplest to have the highest chance of offending the listener so....if so I mean no offense, it is merely my perception of things.

I have written elsewhere years ago (I think) that there seems to be two basic classes of dementia patient:
1. Dementia Victims: Dementia seems to "happen to them"; for these folks its a very passive experience, or at least they passively accept it the same way someone forced into the path of a tsunami would be forced to accept getting wet.
2. Dementia Puzzle-Solvers: For these folks, dementia represents a fence to climb, a problem to solve, or maybe closer to the truth, a whole family of individual yet related problems to solve.  It is not so much that this person thinks they can solve dementia as they are loathed to accept there are no choices remaining. This person understands no single thing can fix dementia any more than any single pill will fix all cancer for example. Thus if they cannot "fix" dementia, they first attempt to fix parts of it that impact them the most. For example I loved movies, games, reading. I purposely set up all levels of complexity of each category for me so as my mental state moved someplace that made reading War and Peace impossible, I had a Naruto manga at-hand. I was still "reading". Games the same way, and movies and television programs. When something like 24 becomes too much, I have 20 seasons of Law and Order to fall back on. Games, I have heavy deep space exploration games and I have hand-held Nintendo 8-bit crap from 1988 on hand so if one is too hard, the other isn't and I am still "gaming."

One other difference with this latter category of person is that fixing parts of dementia isn't enough; the inquisitive mind not satisfied with the status quo then turns its efforts to the question: how can I make dementia work for me?

Now being in that latter category, that statements seems rational as hell to me so if its weird to the reader, well.....

How to use dementia to work for you? Well, in the same way that dementia is a collection of problems, some "fixes" are more collections of solutions, this being one of them. As that is not the scope of this article I will just give a single example for now. One of the key things dementia screws with is time or our perception of it. And as Albert opined, perception can be reality and particularly as it applies to time. Time for us can seem to go lightning speed, days going by in the blink of an eye, tinier pockets of time either contracting or dilating throughout our day. An hour on your clock in the morning might take 4 hours to us, whereas that same hour after lunch might not exist at all.

So I watched how this worked in my own brain as it broke down and realized certain conditions could yield and time "speed-up" and others would seem to make it slow to a sometimes agonizing crawl. I have practiced different techniques to make each happen and while I can sort of force them both to happen, the time speed-up is the far easier of the two and one I use frequently when out of the comfort and safety of the home.

The classic use-case for this is the un-wanted and un-comfortable "procedure" at the doctors office that you must endure. At the risk of TMI, for normal patients when faced with this (say, during a colonoscopy) they are given drugs to sedate them some and more importantly to block out the memory of that time which has the effect of (from the patients POV) that it never happened or happened so fast it wasn't bad, like ripping off a band-aid.

The novelty at being able to do this wore off after the first month or two but it does work reliably enough where now anytime I am even remotely inconvenienced poof, off I go. Its almost too easy and too...relaxing, fun, pick your word...and I know at least the feeling is real because I often feel a sense of guilt afterwards.  I see people in waiting rooms or doctor offices or even standing in long uncomfortable lines and I feel like shaking them and saying "Hey you don't have to be here!"

Thats the other thing, I am reasonably happy, the dementia not withstanding, I have no regrets I know my demise will be better than 99% of them and 100% better than what I imagined my end would be all my life. I have a really great setup at home, like a house-wide man-cave, only geared towards someone with dementia. No stress, lots of the right kinds of entertainment, safe yet fun things for me to do and little to no contact with the outside world. Google screens my calls, I only know like four people, two of which actually write to me so that never gets out of hand. I could not really ask for more so yes, Jeff is not depressed or sad or worst of all suicidal yet I get asked about this all the damned time like its going to happen to me any time now....I prepared the following slide to show medical proof I am not depressed and my happiness has a real, tangible reason once viewed through an XRay... 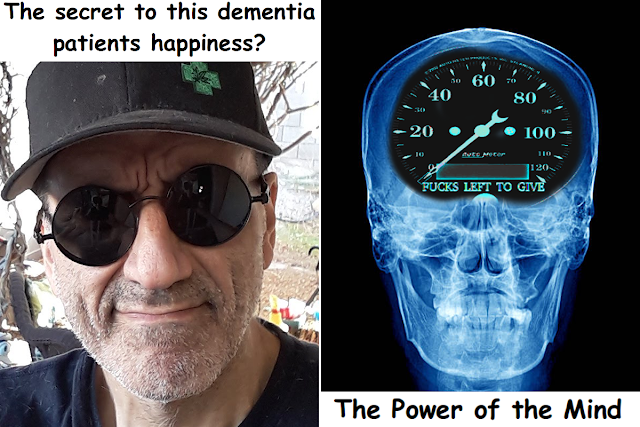