Time Flies When You Have Dementia.. 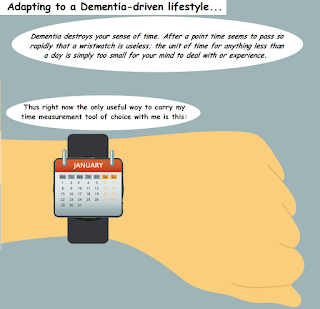 This won't be long because there isn't much to say but the realization I had yesterday was so striking, I had to tell someone. From the beginning I have noticed that time became unreliable as the dementia set in. Time would seem to speed up, slow down, jump about and more. One trend that I noticed back then was that time seemed to be accelerating.

Wind the hands of time forward to this week and my BFO. My realization came in the form of an axiom for living with dementia....time does speed up and there comes a point where time has advanced to such a degree that seconds, minutes and hours no longer really mean anything to me. Its like this:

Your smartphone does alot and it does so very quickly. So quickly in fact that most components inside it measure time in milliseconds or 1/1000th of a second. Lots can happen at the machine-level in a single second of time and so that count of milliseconds is useful.

However as a human, any individual millisecond is without import or meaning because its faster than the blink of an eye...well for me, hours are now at the level of milliseconds for you....my wristwatch is useless to me...

Days and larger are the only things worth noting for me; everything else goes by so fast that they mean nothing...what a strange place to find yourself in....