Apathy: it's not as bad as you think and it's worse than you ever thought it could be. 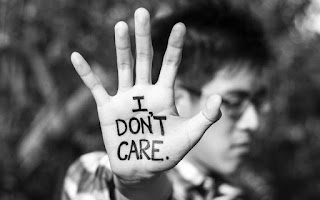 I almost didn't write this due to apathy which is a weird thing to admit to but its true, I nearly did not...yes apathy comes with the territory, I can't change that, although I do try to understand it, the apathy becomes less heinous that way.

But apathy is an undeniable part of dementia but not to point out the obvious (recall: I too have dementia and so consider the source) but if you really had apathy you would not give a shit that you do.

Consider this: what you may be experiencing may not be out-and-out apathy but a part of your mind recognizing the futility of trying things you know are beyond your ability to fully comprehend and therefore, successfully complete. When those kinds of things are all that are on your menu daily, you end up doing nothing. I know because thats exactly what happened to me. I try to make light of these situations, I try to but they are painfully true: 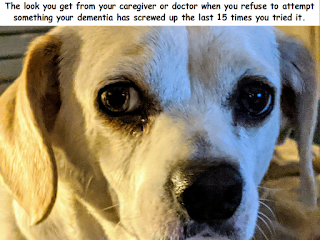 And in fact I try to use that same apathy to my own (sanitys') benefit: 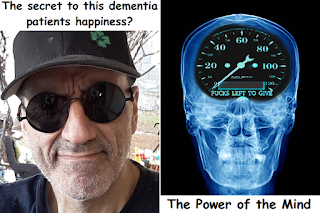 So yeah apathy is real and maybe the way I approach it some may find distasteful but consider the alternatives and make a choice. I guess the most useful advice I can give you is that by which I live (and my supposedly sane wife says is good, at least this part) is not to fall onto your sword worrying about things that you cannot change...as the great sage Charlie Chan opined, worrying is like rocking in a rocking chair; you can do it all day long and accomplish nothing for your efforts. So its your choice to do it or not.

Here is one last crumb I would add to the snack I am leaving for you do mentally digest:

Fact: If you have dementia (regardless of source cause) you will have the symptoms of dementia.

Fact: If you have dementia and attempt (regardless of reason) to cover up some or all of these symptoms, two things will happen, I promise: first you will fail because to successfully cover these things, you need a functioning brain so...you don't and so you can't do it. One of those one-hand clapping in the woods kind of things, I get it. Second however, even if you DO cover some up, you will muddy the waters and delay any accurate diagnosis. In fact you make things worse (again, speaking from actual real-world experience) because when you innocently cover mental slips in front of loved ones you screw yourself because its THEM the doctor asks; so have you noticed anything? They go of COURSE NOT and then you are dying inside because no one sees anything and you really expect somehow that they would....the truth is your loved ones would much rather believe you are OK and will continue to do so until the truth gets so very bad that your efforts to cover fail on such an epic scale that no one can deny anything anymore and let me tell you: this will equate to an extremely long, extremely emotionally painful road to the same exact destination, only this one runs the risk of sacrificing the care of support of those same loved ones because through your covering of those symptoms, you will make liars out of them and that can in time lead to resentment.

As painful as it is, the shorter the road to diagnosis, the better for everyone involved. I cannot stress this enough.

I understand you have issues with your doctor/GP (as its known in the states)..I know this may sound weird but is there any chance you have of personally connecting (like in you your area) who is already diagnosed with any kind of dementia but still in the MCI stage? They would almost intuitively recognize what is happening and maybe make some sense of things. I mean this with all my heart; I have seen almost every doctor fumble with the idea of dementia...I have seen exactly zero patients miss it. To another patient, dementia is as plain as the nose on your face....

As for being upset over just sitting (because of apathy), try walking in my shoes: when the MCI took another step forward for me at one point, things were not that bad and my caregiver/wife could leave me alone for a week to ten days or more and I would be OK for the most part. Then I hit a plateau which for LBD folks usually means a sudden an permanent decrease in cognitive abilities and suddenly time got all bendy on me, she had three days to return yet I got so bad, so fogged in that after I left the burners going one night (all night) I was panicked about being unsupervised and ended up sitting as still as I could in a chair in the living room of our house until she returned....at which point I collapsed and have not been left alone since.......in short, for those three days I was simply scared to move, scared to try to do anything.....

I am laughing cynically; I almost closed this with "I hope this helps" but that would imply that if you had apathy it could somehow be "fixed." and that is one thing I absolutely do not want you taking away from this conversation.....