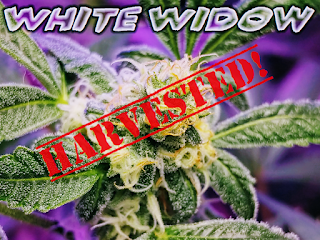 Greetings Kids, well its finally here, the beginning of the harvest period for the 18:1 project Operation Constant Clarity. As you may recall this is a project to create an RSO-based medication with an 18:1 CBD:THC ratio. To that end we have started a few ultra-high CBD strain plants called CB Diesel, 20:1 ratio. The rest are a menagerie of THC standard indicas like White Widow, Tahoe Cure and a little Gorilla Glue #4.

So as luck would have it the first plants to be finished are the White Widows since everything else was either started later or the strain naturally goes longer during bloom. The WW is an 8-week wonder and according to the microscope a few days back, they were ready.

As it turns out, that WW was also the only plant in that tent that we had trellised and the results were interesting. For one thing it further supports the idea that this trellis trick is more than just a trick and in every case there have been very positive improvements to the growing plant as a direct result. 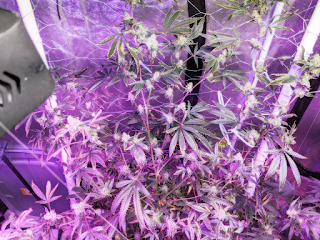 Today was only the harvest of one plant. I guess I further figured that much out; with the dementia, about one plant per days is my limit. By the end I was shaking and mis-cutting everything, stumbling quite badly. So ones the limit, one and done as they say.

The first thing I noticed was more or less confirming what I already knew; that trellising a plant gets rid of the air-bud problem commonly found under normal canopies due to lack of light. Key thing with the trellis trick is all the buds get the same light. I grabbed some quick video showing some lower buds on each, a normal indica and the WW that was trellised. You can see that the indica looks like an air-bud, clearly spend its life under the canopy. Then I show you several WW lower branches and buds all look solid and great:

Another difference I know I should have expected but didn't was that ....really thin branches..under normal circumstances such branches might grow a little bud on the end but not anything worth anything because the thin branch simply won't support more than a crappy little bud. However when trellised, the branch no longer has to support the buds it grows but more to the point, the buds a branch grows is no longer limited by the branch its growing on. The result is you find branches as thin and limp as string with big (for them) heavy buds growing on them, something that could never happen normally...this pic isn't the most extreme example of this but it should give the idea:


The big reinforced idea though is that the buds of a trellised plant are all ore mostly uniform and "done" and this WW was that in spades....harvesting was just snatching each branch, trimming off any plant material with no sparkles (visual clue for medicine)...this is a much rougher trim compared to if you are trimming for smoke. Reason is that you are going to use a solvent to extract all of the THC and so the buds neither need to look pretty nor be cured...this is how they looked: 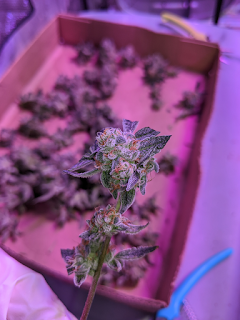 At the end of the day it filled four trays of my drying rack: 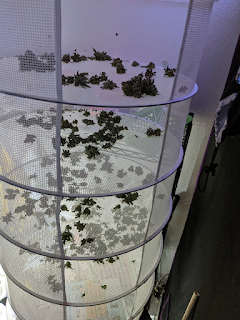 So...one plant down, some 9-12 to go. In about a week I will take the other inidicas in that tent using a gradual harvest method; this attempts to mitigate the problems of canopies choking lower branches... 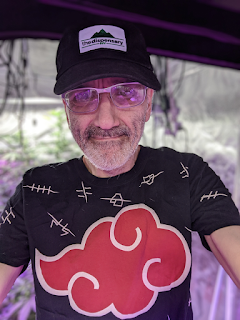 Update: here is an example of how the trellis trick makes the most out of your indoor grow, one example anyhow. This is a shot of two buds grow side by side, one from a trellised plant and one from a normal, Christmas tree shaped plant, same strain, light, etc.  The effects of being under the canopy are obvious on the "normal" bud, something we have all seen, the dreaded "air bud". The left side shows another bud from the lowest limb on the plant but because of the trellis and light arrangement, this got total good light over every inch of the plant and it shows. This bud is nice shaped, dense and solid... 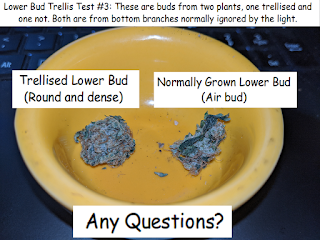