Dementia PSA: Why we get cranky sometimes 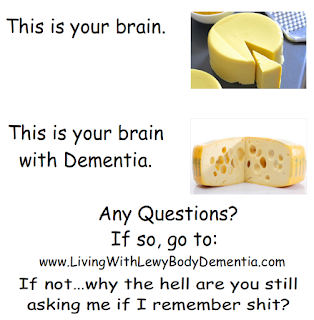 Seems some people assume fighting dementia is like exercising, no pain, no gain. The problem is for us, you push us too far or too hard or too often, or we do it to ourselves we end up descending further into the dementia, sometimes making it part way back but most times not.

When I first started fighting the LBD I figured like everyone else that if I spent the rest of my MCI time constantly pushing myself, in the way you would push unused muscles, I would somehow last longer, remain "Me" longer. The problem is, after a year to 18 months of this I realized almost every time I had a plateau which resulted in a permanent reduction in cognitive ability it was immediately preceded by me or circumstances pushing me beyond my capabilities. I just got worse, not better and if this somehow slowed things, it is not obvious to this observer.

So to test this I purposely toned that crap down, not stressing myself as much as possible, not letting myself get into situation that would be overwhelming and so on. You know what? I felt better and have enjoyed this time WAY more than when I was being "good" and over-doing it all the time, simply "because."

When you think about it, asking a dementia patient to keep pushing things in order to somehow make their time last longer/be better, etc, is as stupid as continually trying to race a car with no wheels. 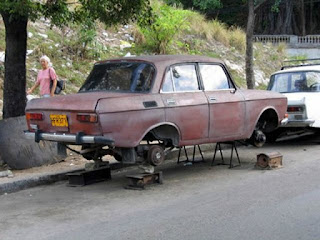 I refuse to participate in insipid and pointless exercises.