Riding the Mobius Strip of reality... 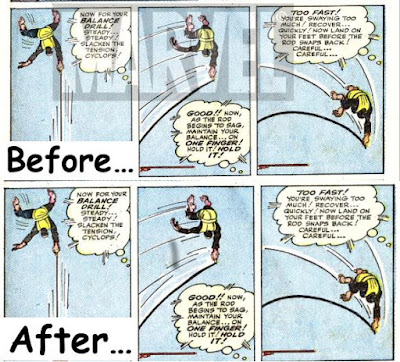 I had the strangest realization today, and given I have dementia and my own cannabis crop, thats saying a lot. We patients spend our time worrying about departing from reality on a permanent basis but in my case it seems I am taking some strange detours.
The first one was the idea that came up today. I am and have been a programmer for a long time and I have written alot of code over three decades. It is really no different than a chef cooking a lot of different meals over the years. In my case though, I have used my skills over the years to bend to real world to what I wanted it to be. The picture above gives a simple example:
I have been into comics since I was a kid but when I snagged the Marvel XMen DVD release with every issue from issue #1 plus all specials, etc I bought a copy. To my chagrin it was in PDF format (OK for reading docs, horrid for reading graphical novels of any kind) PLUS Marvel in their wisdom decided to plaster their watermark all over everything and when on certain screens, it actually obscures the text and images. This was intolerable and I don't live with "intolerable" in Jeff-land...so I hacked out a program to walk through all 2000 issues, split them into core images, scrubbed out the watermarks (take that you scoundrels) and then re-assembled them into an industry standard comic book format, far more readable on different platforms.
This is one way I suited the world to my wishes. I hate commercials, so does the missus so many years ago, before Netflix and Tivo I hacked out a system to record TV shows we liked and then eliminated the commercials for us before placing it on a menu on our TV. We haven't seen a commercial since maybe 2000.
If a movie or show is too quiet, I have a tool I hacked out to raise the volume of the audio in 25% increments so my hard of hearing caretaker can hear. I have tools to fix things like The Matrix where parts are too loud and others like dialog are too quiet; I wrote an app to perform dynamic range compression on any video, forces all loud stuff to be quieter (or no louder than a specific threshold) and quiet stuff is boosted. I have tools to automatically remove television show "headers" like credits and "previously on..." and then stitch together any number of episodes into one lone movie....basically I can turn the best multi-episode story arcs from any show into a seamless movie that plays for 2-8 hours without interruption. We have found that for longer more complex TV plots, this is the easiest way to watch it in one go with nothing to distract. Its hard to describe how great this makes watching certain stories and in many cases, we have deleted the original episodes because this feels so natural.
I could go on (and on, and on...) but you get the idea: I have become very accustomed to being able to direct our version of reality to suit our whims. Imagine having a TV that only played the shows you liked and when you wanted to see them, or any movie at any time it suits you with a single keypress. Randy kinda knows bits of this but that was where my first realization hit home. Today, I need to be able to maintain and extend some of those programs and I simply.....could no longer understand my own creations. In some ways it almost felt traitorous. And painful because as these things break down and I can't fix them, I will slowly be forced back from my fantasy world of everything coming out of the TV screen is exactly what I want and when I want it to the reality everyone else has: Netflix, cable TV or dish or something....and everything those bring with them...
So in my case, I actually started in a bit of a fantasy world and it seems I will be forced back into reality, probably just in time to complete my actual journey to lala-land.
To quote the Oracle, kinda bakes your noodle, doesn't it?