What its like to have LBD: Things hide in plain sight. 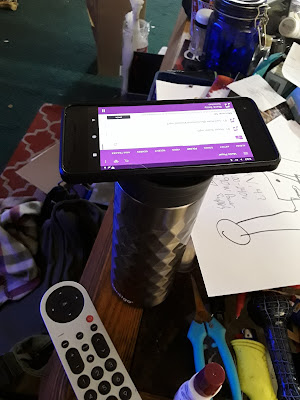 This is a little example of what having LBD is like. I can get into medical theory as to why this is, but one result of the dementia really stepping on your executive function is at once both so very minor at first glance and at the same time debilitating as hell.

To put it simply, executive function is the term for being able to perform basic functions of life (using the bathroom, self-care, walking, etc). When the frontal cortex is hit with Lewy Bodies or protein deposits, that reduces your brains ability to function in this way. What that means in very simplistic terms is that we have problems multitasking or doing more than one thing at once. That doesn't sound like the worst thing but allow me to point out two inherent gotchas with this that many don't realize:

1. Loss of executive function applies to any process your brain tries to do, not just discreet physical acts. This means that basic human senses like sight, sound, touch, etc can be suppressed or disabled altogether. In other words, if your sight is impacted, you can miss seeing something right in front of you. And its not like you can't see exactly; rather its more a case of your brain can't process what it sees. And in cases where your brain is trying extra hard to work right (stressful situation maybe) your brain can even retrieve false images of the general thing you are looking at in order to "fill in the blanks". I can describe it no better than that but I and others have seen this pattern play out time and again.

2. Because you have limited executive function, your brain can only focus on one or two things at a time and usually, that means the shiniest or loudest two.

Add those to the mix and you have the makings of a daily magic show. The short story I describe here just happened the other day and because of the way it happened, it pointed out some interesting things about this to me.

I don't have many jobs or duties around Casa Cobb, and for good reason. However Beth lets me tend to my magic garden as a way to keep me engaged in stuff. I also use music in the same way that Bruce Willis did in Hudson Hawk. It times my work and I know if the music gets done before I do, I was doing something wrong, probably spaced out or something.

Anyhow I am puttering around here doing my chores and listening to a playlist I have when half-way through, I realize I was thirsty as hell and because it was still before midnight, I wanted my coffee. I must have walked around the house for 10 minutes looking for it. I walked past, looked at and examined the cell phone making music....but at no point was I able to see the coffee cup directly under it, as in the picture above. I would look at it in an effort to see if it was my coffee and the music kept holding my attention on the phone; the coffee was effectively invisible. It wasn't until I gave up, sat down next to it and turned off the music.

Lo and behold, there was my coffee. If only this were to happen it might be an amusing story. Since this plays out on a daily basis around here, it makes and already hard life harder.
Email Post