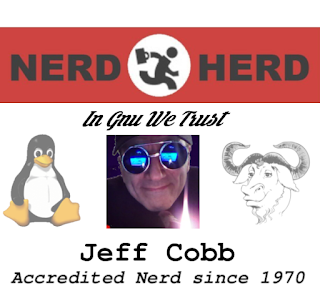 It is funny how times change...I was born in 1961 in the land of far, far away, AKA Kalamazoo, Michigan. Eisenhower severs diplomatic relations with Cuba, John F. Kennedy was sworn in as President of the United States and a chimpanzee named Ham had his ass shot into space, all in January of that year. An auspicious start to things, if you do enough drugs and look at them sideways.

I think I was born a nerd...which was far from a cool thing in the '60s (or '70s or '80s or most of the '90s either) and in fact I had this poster on my wall during middle school that inquired "Are You A Nerd?" and proceeded to point out all the (distasteful) traits of the nerd. Looked like this if curious: 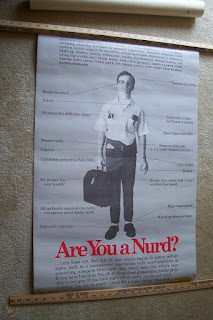 I think I was twelve or so at that point...and was the only kid on the block with: a home made arc furnace in the basement, home made electronic security system including a very James Bond style hidden safe that you could only open by adjusting a faceplate on an electrical socket across the room. I had my own home made computer, limited though it was and finally the plans for a simple ruby-quartz laser on the drawing board. I knew my enemy; I could see him on that poster on the wall, just as clearly as I could see myself in the mirror.

It was only about 1985 or so when the tides began turning thanks to a very simple fact: for the first time, almost everyone who bought one had the same-ish one so apps and games that ran on your computer probably ran on mine too. Manufacturers were quick to capitalize on this and the home computer industry was born. That didn't solve everything for me really; it did however reinforce the idea that misery loves company (computer user groups of the time). People had to go through 60 kinds of hell to get things to work right; folks today have no clue how easy they have it.

Which leads our story ahead a few more years until a happy intersection of events lead me into the rest of my professional life. Never having been to college (Army most of the time) I was self-taught on all of it and it took a while before I felt I was ready to go "pro"...that day came when the dot-com boom was *just* starting. For the first time I was able to use my nerd skills to support myself and my family and really, for a nerd it was a dream come true to get plucked from obscurity and (eventually) get to work with some of the big sharks of the field of engineering. At this time, not knowing what an employer might want, I made myself learn several operating systems, development tools and hardware architectures so back then its DOS, Windows 3.0, OS/2 and UNIX.

Bad news on that last one is that I could not find hardware to actually run it on and get hands-on experience. Good news was there wasn't a big call for it back then; if they wanted something on a mainframe you were talking VAX or something similar. Noplace I would ever interview (I thought).

Around '97 a new UNIX-based OS was released called Linux; the cool thing was it ran on Intel hardware; the cooler thing was it was free of charge (early open source); the coolest thing of all though was it came with not just the OS and a whole little world of applications, it came with all the source code to all of it so you could see how it worked if so inclined. And I was. It was so great for me with no formal education; need to know how a word processor works? Check out any of the dozen word processors that came with it, from notepad functionality all the way up to an office suite. Database? same thing: you can install it for free, look at all the source code, make changes if you like and rebuild it and distribute those changes as you see fit. Why open source has such an amazing bug-fix record.

I taught myself Linux and worked day and night to build as much experience as I could for free as an engineer and it paid off. Soon I was working multi-OS gigs with Linux being one of the options and later, Linux was the only option (thats what runs Ballys slot machines BTW; did a gig there for a while around 2010). Because Linux was hot and it ran on everything from your phone to the mainframe at work, having someone on-staff who was a Linux geek was a good investment. so I got lots of cushy gigs the rest of my career thanks to Linux.

However in'97 Linux was a cast-iron bitch just to use and impossible for the uninitiated to install with any level of success. The rawest (and most powerful) of those Linuxen was a distribution called "Debian", after Ian and Debby.....somebody....who made it. Debian was known as the OS that was like chewing tin foil to install but once set up it was the most solid thing on the planet and after decades of use, I agree. But in 2000 or so, it was rough baby and I could get it installed more or less but I had to use two or three of my best curse words to make it happen. And cut a chicken at the altar and face the sunrise while reciting.....oh you get the idea.

Why all this background? Because....20 years ago, Debian was the hardest OS to install on plain-vanilla Intel hardware....it took all my best nerd genes to get it done. Now, some 2 decades later I have full blown dementia and the same year I was able to reburn the OS off an Asus tablet we bought from whatever was on there to the current release of Debian....and a week later, I was able to install that same Debian release on 10+ year old hardware I found in a laptop that had been holding up one corner of the sofa. Me with dementia, installing a full (and properly configured) UNIX system on two different levels of hardware and it all works.

I wish I could say..."Damn, I'm good..." but the truth is, the folks at Debian got tired of being the whipping boy of the OS world when it came to insane installs....so after a shit-ton of work and testing, they came up with what became known as the Drunken Chicken Installer..it was an installer that had multiple choices at each step of the installation but it always had a guaranteed safe (for that hardware) option as the first, default option. Thus the idea was that a drunken chicken could install Debian successfully by constantly pecking the Enter key. And it worked amazingly often...and this was in 2000 or so....now the installer is so slick, it still works well enough that same alcoholic fowl could be a system administrator nowadays...so while I had way less clue what I was doing than I did back then (or five years ago), I did accomplish something that would have been a nightmare even those same five years ago. *I* did, Mr. Brain-Damage.

And for that reason, I retain my claim to my Geek or Nerd credentials.......

PS: 1970 was about when I write my first line (sorta, more mechanical) of programming code... 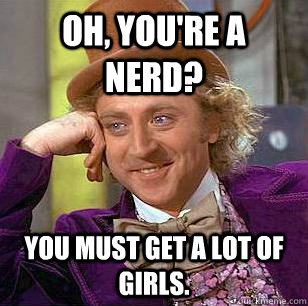