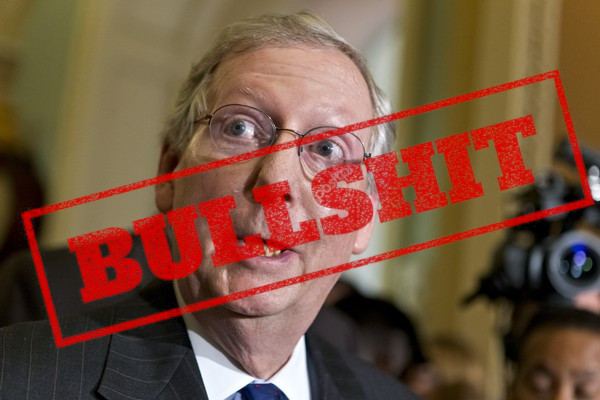 This whole charade with Brett Kavanaugh is just mind-blowing on so many levels. I am not a Democrat, Republican, Socialist or any other kind of "ist" you can think of. I am a disabled veteran who prior to the Republicans foisting Trump on the rest of us never really cared about politics, more than happy to let those who geek out on such things (see picture above) have it, so long as they didn't screw up too much. The take-away here is that I have no political axe to grind, no irons in this fire. My only motivation is to point out the hypocrisy of the Republicans lead by Mitch McConnell.

They need to get out more. They apparently not only have no clue what real Americans are thinking, they don't even know what real Americans look like. Mitch is patting himself on the back for not giving in to "the mob", his words. The problem is Mitch, if you got out more you would realize the "mob" you are so proud of besting is plain old American voters, you know, the ones you are there to support. Not yourself, not your party; you are there for your constituents and by disregarding them as a mob you demonstrate how out of touch with ordinary Americans you are.

Here is a free clue for our reality-challenged senate: If you piss off and insult most Americans, by definition you will have created your own "mob". As your president is learning, cleaning up messes you made for yourself doesn't mean you are good or a hero, it simply shows you know to clean up for yourself, something most children learn. So cry me a river about your fighting off of mobs. You are nobodies' hero, Mitch.

The real thing here though is that if Mitch doesn't know what an American looks like, he definitely has no clue what the confirmation hearings looked like to ordinary Americans. To the senate, they think they look like this: 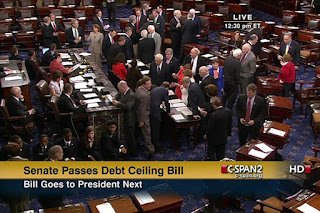 When in fact to most Americans watching, it looked more like this:

The Republicans act as if we are selecting a shiny new supreme court justice but to the rest of us, it felt more like they were trying to sell us a used car, one they knew would fall apart upon any serious inspection. I never understood why it was so important to rush the confirmation until I learned that as long as he was Brett Kavanaugh, judge, he was subject to ethics laws and the violations that go along with breaking them. Once he is a Supreme Court Justice however, no ethics laws can touch him....for life.

The thing is, the moment you remove the general politics from the confirmation, Mitch McConnell looks more and more like the stereotypical shady used car salesman. The Republicans showed no regret over short-circuiting the normal process (and norms in general) in their rush to get Kavanaugh on the bench before anyone could take a serious look at him. If Kavanaugh was a truly good candidate for the highest bench in the land, he would have been just as good of a candidate after a thorough investigation in full public view. However since Republicans manufactured a report with the unwilling assistance of the FBI (if I were in the FBI I would be so angry at the administration for forcing the FBI to use (and possibly lose) their solid reputation for quiet competency.  The report which no one can see, let alone verify for completeness, is being used to try to prove a negative, which is notoriously hard to do. The incredibly obvious lies (they are learning from Trump) that have come from it are disingenuous at best.

"We saw no new facts to corroborate the accuser or hint of anything criminal by Brett Kavanaugh."

That one, uttered as if it were a talking point by everyone from Mitch to Flake to Hatch (and Graham, and Grassley) is the absolute definition of being disengenuous:

As evidenced by the narrow constraints of the "investigation", the Republicans engineered this outcome by making sure the FBI was not able to use input from anyone that actually mattered to the case. This is blindingly obvious to any casual observer. Of COURSE Republicans won't find anything wrong with the used car they are trying to foist upon this country if they make sure none of the evidence is even pursued.

To compound their bullshit, they actually had the nerve to expect us to believe that every voting senator had read all 1000 pages of the report before voting. In one day. In a SCIF (secure area for reviewing classified materials). Even if the senators did work at it for 24 hours a day, in the end it was only 24 hours for them to review it...and since only one copy exists (that they don't want anyone outside the party to see, another indication of a guilty conscience) that means they want us to believe that all 100 senators reviewed all 1000 pages of the report, one at a time. These must have been speed-reading mofos because thats one senator completely reading all 1000 pages every 14.4 minutes, all day long. And yes, they are all claiming they did this obviously-impossible feat in time for a vote. Think about it: could you assess how complete a 1000 page report is on anything in less than 15 minutes? Don't be absurd (which apparently also means do be Republican)...it takes little to expose what a lame story they want us to believe.


If you were a teacher and at the end of class one day you assign a 1000 page novel to be read, and the next morning all 100 of your students came in claiming to have read and understood the entire 1000 pages, would your bullshit alarm not be ringing off the hook? Or would you just award an "A" to each and every one?

And yet they want us to just believe their bullshit, because if we don't we will realize what a con they are trying to pull on the American public and call bullshit on their tactics. They didn't get close to clearing Kavanaugh, not to ordinairy people. I am a dude and was one back in school in the 70s and yes boys got into shit like Kavanaugh. We were stupid and had the same disease of teenagers from the dawn of time, thinking we knew everything and the world was our playground to play in or toilet to shit in. So while I can't say one way or the other if what his accusers said is true, to say a teenage boy with a sense of entitlement and an unlimited beer budget acted like a drunk teenage boy with few constraints, that falls into the "well, duh" column. This also gives lie to the veracity of the report supposedly supporting his innocence. Lets put it this way: the description of his accusers sound more like what I recall from my misspent youth than his claims of piety. Its hard to bullshit a bullshitter and its hard for one ex-teenage boy to bullshit another one of the same generation.

I know this says little good about me and others in my group but like what probably happened in the case of Kavanaugh is...I grew up and with effort got my shit together. He may have done this too...but he made the mistake of lying to me and everyone else about something we knew better. If he had admitted mistakes and pointed to his reformed character he might have been OK and most of the drama would have been avoided...but Kavanaugh chose to lie, as if that would clean up dodgy high school years. And the lie he told was not 35 years ago, it was this fucking week.  No one who lies to my face so obviously has any place as a judge, adjudicating the fate of others. IOW if he is so ready to lie to get that job, I don't want him in that job. HR people out there: how many lying job applicants do YOU roll out the red carpet for?

But the real reason this is complete horseshit is that as demonstrated by Kavanaugh at the hearing, to some he may have sounded like an injured father figure but to many he just looked like another ranting version of Alex Jones, conspiracy nut extraordinaire: 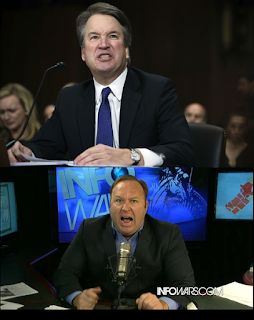 Clue for Republicans: don't keep blaming the resistance to you on Democrats angry over the 2016 election loss; you are the only ones still fixated on it. Your actions since then have done more than enough to energize and motivate everyday, non-Democrat Americans to work against your every effort. Why? The answer is blindingly simple kids: The things the Republicans and Trump are trying to get away with just plain suck, and things just plain sucking is something average American citizens know all about. It is really not complicated, requires no exotic beliefs in conspiracy theory, just simple observation of the facts.

The facts show that the Mitch and friends don't have a clue about the Americans they claim to lead and represent. I don't know who would be better but it would be hard to find worse leaders than Mitch, Paul, and Donald. As long as ANY of them are there, we must be vigilant now and vote on November 6th. Get some folks in office that don't bring their Reality Distortion Field into work with them....