Sometimes objects in the mirror are actually dumber than they appear... 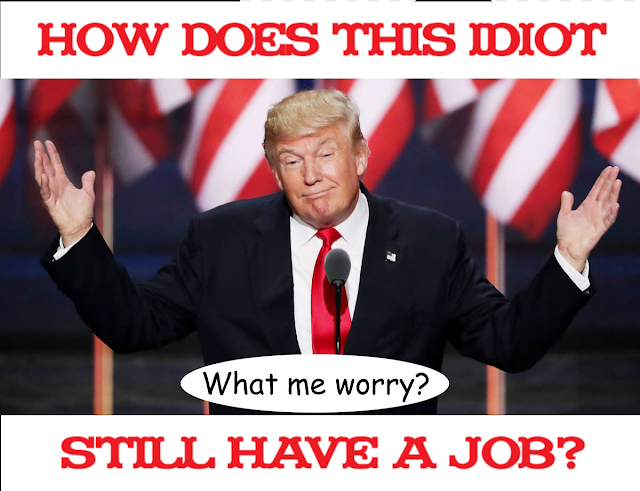 If there was a single gift I could give to Donald Trump, it would be that when speaking of things he does not know, STFU. Seriously dude, you embarrass yourself, you embarrass this country but mainly just just look like an idiot when you try to talk about technical things. If its that Brad Pascale dude who is your technical genius filling your head with such bullshit, you should fire him because he makes you look stupid, and with your normal song and dance act, thats saying something.

Two key things you don't know shit about, one is tech and the other is the people making it. The tech has evolved so far beyond your understanding that you sound like a 5 year old child when you scream that Google and other search engines are biased against you and conservatives. It is not so much that the folks who work at Google or other tech might be biased against you; after working with tech workers for a few more decades than you have or ever will, I am pretty sure most of them think you are a piece of shit. The real hard core techies, the ones that invent your toys and weapons have an almost universal disgust with liars (you), stupud management personnel (you-you) and anyone or thing threatening their intellectual playground (YOUYOUYOUYOU). Has nothing to do with Republicans, Democrats, conservatives or liberals. To them, bullshit stinks and thats all that comes out of your mouth. So yeah, they probably would not piss on you or any of your ilk if you were on fire.

As an added bonus though, since we observe you so clearly as a bullshitter, you should know that nothing you say can be believed. So when you try to scare us about caravans, you get a "yeah, right." Democrat mobs? Yeah right. Pre-existing conditions? Yeah, right. Deep State? Voter fraud? Hell, any of your excuses for your own behavior will get a....yeah, right.

The other thing you just don't get is that for the folks that can conceive, design, create, maintain and improve things like the AI driving Google search, truth and correctness of operation are concepts of vastly more important than politics in general and anything you have to say in particular. I know you just can't grasp this but real engineers would rather set their hair on fire rather than risk screwing up something that has been worked on and improved for decades and at the end of it all, its the best in the world at what it does. To mess with that in the hopes it can skew results for any one political party is the very definition of insane, any benefit paling before the enormous risk of loss. When you claim that has been done, it is at best laughable by folks in the biz. You just sound like a loon, buddy.

If it was just this I could easily blame your tech manager but this crap you are pulling with your cell phones is just plain idiotic. Spent years in tech and years in Army security and I can assure you that as long as you are using unsecured phones with your demonstrated lack of security protocols, Don you are a fucking security risk without measure. You think because the president has the power to declassify that you can just blurt out anything that comes into your head on an unsecured line...doesn't matter if you are just stupid, you are being obstinate, or you are in fact in the pay of foreign governments, the actions you take and risk our nations security will be something this country will still be recovering from long after you get your official dementia diagnosis and are shuffled off to a farm.

We get it that you are a technical moron; not everyone is good at everything....in your zeal to claim to know so much, be careful that you don't end up simply proving to everyone, you are not good for anything.

This person is in charge of our cyber-security, our secrets? Anyone else, in any job requiring a security clearance would have had it revoked and they would be fired if they performed like Donald Trump has on the job.

He also spends more time screwing off than doing his job; "Executive Time" indeed. Again, anyone else in any other job who screwed off as much as he has and continues to do, would be fired. How is it that he has not?

He has fumbled every aspect of his job, from understanding the issues he is making policy on to treating the American public with sincere compassion. He treats violent dictators with more dignity. Yet, with all his mishaps, the Republicans are fine with it; anywhere else Donald Trump would be fired for incompetence. No question...