These people expect not just exoneration but sympathy and respect. Bullshit. 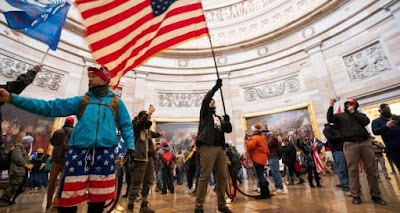 As we are closing in on the relative end to the insanity of the previous four years, the same people who caused this country so much pain now come not just asking but demanding respect for MAGA peoples feelings. Feelings that are hurt because they supported a serial liar and then fell for his bullshit and now realize it was all a lie. Now I am being asked to forgive and understand them after four years of buffoonery, violence and just plain pissing on American ideals. Real ones, not the forgotten fantasies of Johnny Reb.

Trump lied to them about the election and kept lying to them when all reason (and court cases) proved otherwise and his supporters believe his so much that they attacked their own countries capitol last night.  They did so much damage and violent acts in his name, because of his lies and now we are supposed to forgive them, like they knew not what they did? Bullshit, the stuff they were doing was wrong, regardless of who told them to do it and this is something every grade school child should know.  They like to preach about God, no pun intended but they refuse to use the brain that their God gave them. And if all that fails, there is that old devil math: sure there are 75 million who voted for Trump but 8 million more voted for Biden, so Biden won, thats how it works. So even if there are 75 million unhappy and distrusting Trump fans, there are 82 million people who hate and distrust Trump more, which is why he lost. 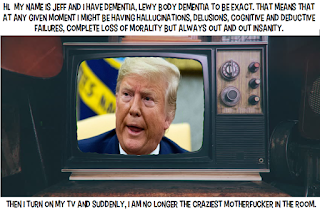 Trump lied to the American people over and over about the corona virus and now that we have the pandemic so out of control here thanks to him that we have a fucking 9-11 every...fucking...day. And his idiot followers use his words as an excuse not to take precautions to stop the spread of the virus. And I am supposed to feel sorry for these cretins when they come down with it and are gasping for air trying to breath? Cry me a fucking river.  I think every damned one should have to foot the bill not only of their treatment but of the 5-10 others they infected through their idiocy. You want fair? Thats it.

Trump wants his lemmings to overthrow the government so he can stay a step ahead of the law that is coming to visit his home soon so he is happy, no delighted to wreck something that has worked for 200 years, not for his followers but strictly for Donald J. Fucking Trump. So when these people get sent to prison for breaching federal property and causing rioting and destruction on a federal scale, boo fucking hoo on your sudden career change.

For those getting doxxed at this and losing their jobs, homes and families, thats what Trump did to folks at the border. Isn't fun when its you, is it? Again, even in this economy, cry me a river if you cant feed your family; I will save my tears for those not trying to destroy our country, not terrorists like Republicans and MAGA ass-hats. You should have thought of that before picking up, travelling across the country only to destroy something precious to the rest of the country. You are not patriots, you are terrorists plain and simple, and not even particularly smart terrorists at that. 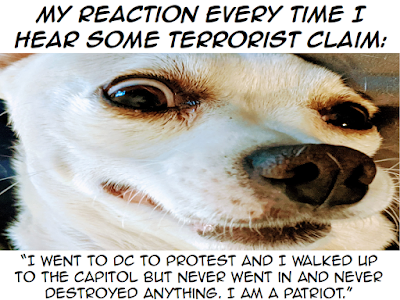 Oh and for the 1,001 so-called "Patriots" that stormed the capitol and then swore they just stood around while everyone else did the smashing and looting, bullshit. If every one of you who claimed this were to be believed, there would not have been a single person in that building that night that didn't belong...so your "I was just standing around being peaceful" thing is straight out bullshit that would not convince a 12 year old.

One kind of ironic outcome of this, a perfect bookend to 4 years of Trumps lies and bullshit is this gem: running back in 2016 Trump opined that he could shoot someone on Fifth Avenue and get away with it...well he caused shooting in DC at the capital and from what the news is showing, he sure as FUCK isn't getting away with anything.....

Not sure where this is gonna go but something happened in the past 48 hours. Even though most Republicans Reality Distortion Field is still hard at work denying the fact they are the minority, Trump is an insane criminal and following his crazed rhetoric is killing them politically, the irony of course being that if Trump succeeded, none of his sycophants would have stood a chance in 2024 due to direct competition from Trump.The Republican party seems to have achieved Jedi-like skills at kicking their own ass.  But in the way of a small gift after four years of having no escape from Trumps lies and criminality to see him deplatformed so we only have to listen to a little bullshit before hes kicked out and most of that are those ass-hat terrorists claiming to be "patriots" who "went to support my president and peacefully protest" and "not harm anybody or destroy anything" that ended up doing all of the above and now trying to shield themselves and their shameful acts under the cloak of patriotism.  One thing that listening to these insurrectionists explain themselves after the fact is that they are dumb enough to believe the bullshit Trump and his ilk are shoveling (which is bad) but also willing to hurt, mame, kill and destroy in the name of that false belief. People as a group that are so easily fooled even after being shown evidence (real stuff, not like that fleabag woman in Michigan claiming to be some IT pro...who BTW from the POV of an actual IT pro, she acted like nobody I would have ever hired,. Her IT lies are just too easy to see thru. She would not have survived a technical interview with Sony, let me assure you of that.  Even if she wasn't washing glass as she claimed, she was there for a freaking day and anyone working with complex systems need more than a single day to get up to speed on anything like that, let alone completing some fictional IT task in a single go. And a single day, regardless of what she actually DID do, a single day makes her any kind of expert on ....anything? If a potential employee came to you and tried to convince you they got a doctorate in a day, you would clearly call bullshit on it. The only people believing her are people who never worked in the biz a day in their life. And on it goes with more dumb people believing Trump and then repeating his bullshit as if it were true. I have no sympathy for any of you; you knew he was a lying sack on day one of his inauguration and four years on you keep basing your worse actions on his worst lies as if that was OK or somehow righteous. 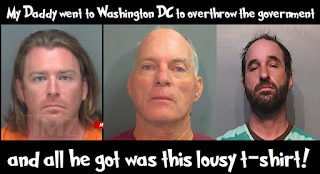 So no, if you go to jail, lose your job, your kids, your freedom, or even your life to covid 19 for you deniers and maskless assholes out there, sure there were 75 million voters who believe Trumps bullshit like you but you forget there are 82 million that will give absolutely zero fucks when bad things befall you and your family. All for Donald J Fucking Trump.