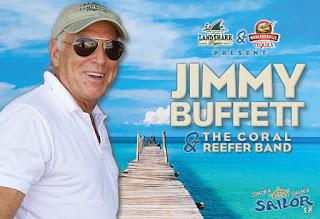 It’s the morning after. The 2018 Son of A Son Of A Sailor tour rolled through Cincinnati yesterday, I attended the entire day’s tailgating events and the ensuing concert and am alive this Morton tell the tell. It was a much more difficult task to complete this year than in years past but one that I wouldn’t have missed for anything.

As a bit of background, for many years, one of my sons has taken me to the Jimmy Buffett concert, complete with the day of tailgating, as my Father’s Day present. It has become a tradition that we treasure, at least I’m sure I do and he seems to as well. But since my diagnosis, each year has become a bit more of a struggle for me to make through the entire day’s activities. The heat, the noise, crowds, unfamiliar surroundings, etc... are just becoming more than my befuddled system can process. I can still fake my way through it for the most part and hide the majority of my lapses but not all. And because of this I think I may be most thankful for the little group we have assembled over the years. My diagnosis is no secret among this group. And without my knowledge, before our first outing after the diagnosis, they came up with a proactive plan to make sure I was taken care of. I’m not left alone, they know most of my foggy signs and how to make sure I’m realistic in my actions, they make sure I get to my destination, that I eat appropriately and stay hydrated,.....in short, they just make sure my childish brain doesn’t become overwhelmed and allow me to harm myself or others. And they do so seemingly effortlessly.

This system has worked well since my diagnosis and it did so again yesterday. But yet yesterday was different. The heat bothered me more so than normal. I ate approximately 1/3 of my hamburger and became extremely nauseous. Of course there was bourbon, Corona, and rum. And as always, I partook in these spirits just as everyone else did. But more in the spirit of a sip here and a sip there, not a full out drink followed by another as might have occurred in years passed. Usually, by late afternoon, I’ve had just enough that I need a good nap. By which I meant get so sleepy I just can’t stay awake. Didn’t happen yesterday. By concert time I was completely wiped. Then to top everything off there was an accident on the interstate and they delayed the concert by 45 minuets to allow everyone time to arrive. I slept off and on throughout the concert.

But despite all this, the concert, his 51st consecutive sold out concert in Cincinnati, was awesome and I am just tickled pink that I was blessed to attend one more year and continue one of my most treasured traditions.
Email Post