Allow Me To Introduce Oscar 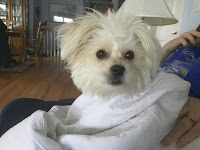 I would like to make today’s post a little different. I don’t want to have the normal this is what I’ve lost recently, not another gloom & doom story. Today, I would like to introduce you to Oscar. Oscar is just over 1 year old and is a Shiranian (half Shih Tzu half Pomeranian). I found him on Craig’s List last fall.  He was an interesting little fella. He was ~6 1/2-7 months old, living on a cattle farm with many other animals including a pot belly pig, two big dogs (not sure of breed) that I swore were ponies when we 1st pulled up, chickens, and, of course, cattle. He had never had a leash on and was accustomed to running freely between the indoors/outdoors. He had burrs in his coat from running through the weeds in the field. And, he is the friendliest dog you would ever want to meet, doesn’t know there are strangers and dangers in the world that he shouldn’t approach, and thinks everyone we meet on our walks, including other dogs, should come over and play with him. He is still bursting at the seams with exuberant puppy energy therefore many of the other dogs, especially the older ones, will only approach him hesitantly.

Oscar has since become my constant companion, always in my lap or at my heels as I go about my day. He loves nothing more than to snuggle into the crack between me and the chair arm, lie on his back with all 4 feet stuck straight up in the air and me scratching his belly. He doesn’t have me wrapped around his little paws at all! He has also developed a sense of when I’m at my foggiest and will not leave me during those times. As much as he likes me, he likes my wife even more. He loves to curl up in her lap and nap and he knows she is a softy and will feed him bites of her apple, pear, whatever she’s eating (always something dog safe). Of course, I’ve never been known to slip him a few bites as well. He also has a major jealous streak. If I walk up to my wife and give her a kiss or just hug her he goes absolutely nuts. Although he rarely barks, he doesn’t hold back at these times, tries to separate us and wants one of us to pick him up. It’s absolutely hilarious.

We had also rescued 2 kittens from the shelter a month or so prior to bringing him home. One solid black, the other, the shy one, was a tabby. When he walked in the shy one, our little princess, ran downstairs and we rarely saw her for the next week but she eventually came around. Oscar and Jack, the black cat, became immediate friends and have been wrestling, chasing each other, curling up beside each other in our laps to sleep...just generally rotten little boys playing together and getting into everything, pretty much from the very beginning. May, the shy cat, eventually came around and tolerates the boys and even joins them on occasion, as long as there’s no wrestling. It amazes me how well the 3 of them get along. The really funny thing is Jack weighed 4-5 lbs less than Oscar when they were introduced and Oscar pretty much had his way as he as the much bigger animal. Now though, Jack weighs almost 6 lbs more than Oscar and the shoe is on the other foot now when they wrestle. 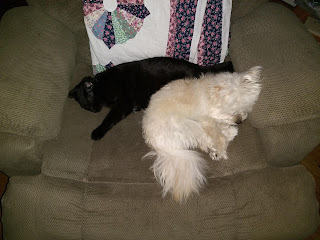 It took a lot of serious discussion over several months to decide to get a dog. There were many concerns that had to be overcome. Obviously, I would be primarily responsible for his care as long as possible but what about when I was no longer able to care for him. I didn’t feel it fair to add another responsibility to my wife and son if I were unable to care for him. They, on the other hand, believed that if I felt the dog would be good for my mental state, calm me when I’m the foggiest, and just overall give me a little buddy that stays in my lap and keeps me company, it would worth it. So, it was decided that we would get a dog. The biggest concern was would he continually be under my feet and become a tripping hazard. So far, that has not come to pass, he likes to stay back just enough so that he can easily look up and see what I’m doing. It only took me about 2 months to find him and I felt like I was being interviewed to adopt a child when I called about him. Which is extremely good, because the lady who had him was very concerned about the home he was going to.

Of course, as soon as our weather turned really cold, my cognition went into the tank and I became unable to do much of the care for Oscar. My wife and son, true to their word, took up the slack without 1 complaint. It became readily obvious though that his little paws couldn’t tolerate the cold, snow and ice. After a few minutes outside, he would simply sit and start licking his paws. He was carried home on several occasions because of this. We even had boots for him to protect his feet but he would always pull them off shortly after going outside. Apparently, this situation was really concerning me, because a doggy potty pad, complete with AstroTurf to serve as grass, showed up on our doorstep a few days later. Seems, sometime during the night a few days before I had been searching for options and ordered this with no memory of it at all. Oscar’s 1st reaction was more or less, “Why would I ever want to use that thing?”. But over the course of the next week or 2, he came to see the pad as his best buddy and is now rarely taken for a walk to potty.

I am extremely glad we made the decision to get Oscar. Even though he can be a handful at times, he has made our lives immeasurably better. 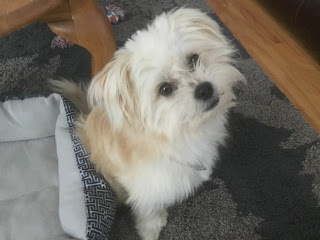