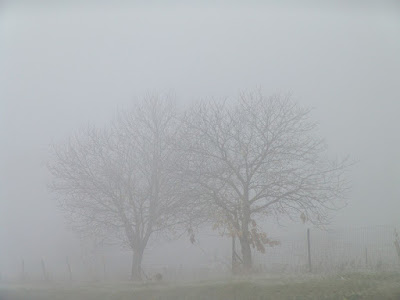 What follows is an attempt to send notes back from the fog-state to myself. Change messes and aggravates my dementia and big change does it big-time. In this case due to work on the house I have been holed up in an hotel a few miles from home. I will keep a sort of mental log of my time here; it might be instructive, I can't figure it out.

Notes from the fog

* Work being done on house. As the house was prepared for work, the constant change started to trigger a more frequent fog.

* Since in hotel, fog is pretty complete.

* Any real ability to make decisions have long gone.

* I find Law and Order: SVU unsurprisingly depressing when seen in a semi-constant marathon.

* Commercials are intolerable. I don't now how you all deal with this and makes an interesting (to my state of mind) point: The idea that people with dementia like and prefer to watch familiar re-runs, that is still suboptimal, because watching stories I know but only sorta remember and keep losing the plot thread of familiar stories due to commercials that work in a time frame around my crappy working memory. At home, watching all this from my server, even the oldest or newest stuff it has no commercials so the stories are never interrupted (cool) and I have to work about 1/10 as hard at home to watch the same story.

* Time is more bendy than normal. At breakfast I had the worst feeling it was supper time.

* Probably related but my recall of what has just happened during any part of that day is spotty at best. I just don't know where the day goes.

* Became instantly brainlocked by the 6000 games I brought to keep me entertained during this. Its not that the games were hard, my ability to choose one was. Finally gave up and put the game machines down.

* Same problem with the 40 or so movies and anime shows I brought for entertainment. They remain unwatched so far.

* I can only imagine how bad this would be if I did not have my special CBD sap along with some RSO (Rick Simpson Oil). One thing that would make these days less long would be edibles but since my stomach surgey in...some year, I can't eat enough of the standard edible here in Nevada for any real effect. I thought just the Ringos Gift sap (18:1 extract, 73% CBD and 3.55% THC, my current perfect medicine for dementia) and a few disposable vape pens would get me by but that only works if I remember to do them. By day two I am pretty miserable most of the time and a friendly dispensary friend suggested I try something called RSO, or Rismpson Oil. Quick trip to the dispensary later and you know what? Not bad. Let's see how things continue.

* Am getting to really hate certain commercials and general malaise means I only remember to even mute them one time in ...50. So forced to watch the most unbeleiveable erectile problem commercials...I mean there is a narrator talking about such and such drug helps fix some exotic problem but the whole time you see little vignettes of old men fondling phallicly shaped fruit and vegetables...it just twisted my head in so many ways. OMFG amd I glad I NEVER get to see commercials at home and can't wait to get there sooner than ever before.

* Here is an interesting perspective: its only been two days but I right now cannot recall the last time I was home, let alone how long its been since it is "business as usual."

* May the deity bless the lead actress on SVU but man I am just now seeing some more recent ones and wow she looks chiseled at this point. Keeps distracting me. May the deity thank that one too because the primary theme of SVU really bums me out. Its well-written and acted, sometimes too well. Glad I don't have that job.

* A weird thing about being this far gone: while the average thing is too complex for people in this state, I suspect this makes the obvious speak in a voice that is more easily heard in this state than anyone in a normal one. Like something on the seemingly eternal loop of news shows and stuff, they are making a big deal about did Trump do the tower thing while he ran for president. Why is anyone even asking if this is true? A. This is what Trump does (the business model of flashy building someone else pays for and he puts his name on). B. I remember reading somewhere that Trump never actually thought he would win. C. Trump Tower Moscow was his dream deal. D. For folks like Trump, its "Greed Uber Alles".  E. Trumps demonstrated lack of knowledge about election laws.  Thus the deal sounds exactly what he would do as per his history and yeah, I can see him doing this right up to the day he won. His "crime" here is probably just greed but that is no excuse and the fact that he refused to divest after the election reinforces D above.  This seems really obvious and I don't really see what it means if anything but thats what screams out to me.

* I gotta get out of this entertainment wasteland. I have watched TV shows that I would have sworn that I would rather have my balls pounded flat with a hammer than watch. Sigh.

* My wife/caregiver is going to amazing lengths to help me weather things. The kinda shit "thank you" just isn't enough for...more like "thank you for my survival." Unfortunately my ability to reliably speak was gone before I got here. This has all the feelings of a plateau...please let it not be.

* By the time I got here, my state had brought out enough Parkinsons symptoms that I was stumbling and falling alot. Forced by caregiver to use cane since then. Sometimes I hate it; sometimes its my lifeline.  Weird.

* The RSO (Rick Simpson Oil) helped a LOT.  This stuff is the difference between pot and medicine...
Tasted like crap but 1/3 of the syringe on a cracker lasted me all night and sometimes the best medicine is a good nights sleep. Still have until tomorrow but frankly at this moment I simply cannot conceptualize "tomorrow". It feels like a 20 year old planning his 50th birthday party...so I am just drifting along, carried away by the currents of the day, completely rudderless...

* I get the basic problem of dementia. You spend most of your time out of the public and another thing is you forget where you are which results in this morning at breakfast downstairs in the casino with dozens of other early risers or those still there from last night. This is about all I do in public while here. So we were waiting for eggs when something Trump did was splashed on the wide-screen and with only a half a thought (that thought being I was still at home) I stated with conviction and volume I am told "What a fucking idiot." My first indication of danger was the color my caregivers face was turning, me mentally trying to flit through recent memories like Rolodex cards to see what I had done wrong...

* Damn. As fog remains even a little deep, memory is still the first thing hit, how much and how big my memory window is depends on level of fog. So by now my working or short-term memory is for shit. This also revealed why todays current news-cycle is hell on dementia patients....the basic format of the big news channels during the day is the news is on a kind of loop, repeated every fifteen to thirty minutes. For normals, that frequency is for anyone in a hurry, they can tune in whenever, get a dose of news and as soon as they see it repeat they can move on. But what do you think happens when your working memory gets to that fifteen to thirty minutes? Yep, all the news keeps seeming "new". Think about that; the usual human safety net to such barrages is to become numb to it or burned out on it but in either case it is safely ignored. No such luck if it all seems new, all the time. You never detect the loop. Its like absolute chaos, everywhere in the world, every minute of every day. And at this point it feels like it has been on for about six weeks, since we woke up this morning.....