The Condition my condition is in.... 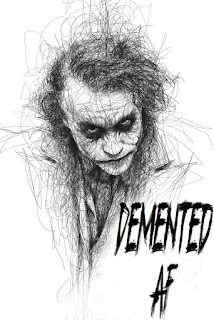 Jeff here. While this blog may have had alot of rants of late, blame it on the current political situation combined with a dementia patients natural disgust with unwanted chaos. It is cathartic getting those rants out.

All of that said, the core use of this blog is for Randy and I to share as much of our trips through the looking glass thanks to LBD as we are able. When we were both diagnosed (before we met) we lamented on the fact that there was so little information out there on LBD from the patients POV. It would be nice to know what to expect. In a way with so little info out there the situation is scary enough. Less info means more guess-work and imaginations at work. So we post what we can, the odd things that come along that only another patient would know.

And so it is that today I am going to try describing my current status.

* As of my most recent trip to the Lou Ruvo Brain Center, I am on a patch that doesn't seem to do anything.

* My sense of time of late is all but gone. This is messed up because not only it is hard to describe, I can't even remember how long its been like this. Yesterday felt 3 hours long. Not only can I not remember what I had for breakfast yesterday, I have only dim ideas about when or if yesterday happened at all.

* As implied above, memory has gotten suddenly worse. Some of the worst parts are losing key bits of things that I alone know how to do, constantly forgetting what I am supposed to be doing and going into a semi-panic worried I am late getting something important done.  Names, places, events, things that used to come naturally now seem to come up about 90% complete. I will recall 90% of the story while totally forgetting key things, people and events.

* I am finding myself suddenly in a room of the house with no idea how or when I got there or what I was there for in the first place. As a twist on this, another fun recent thing is this: say I am in the living room and need some meds that are in the bedroom. I get up and go in to get them...and after a sort of memory black hole, I come back out with an armload of items, usually very few related to what I went in for. I mean I go back for meds and come back with the remote control, a paper plate, a video game, some laundry. No meds though; never do I come out with the thing I went back for in this menagerie of crap from the back. This is not limited to this situation; I can go into the kitchen for a banana and come back with bags of chips, sandwiches, bottles of soda, etc. IOW an armload of crap, none of it what I went for. What happens during this time I have no idea on. Happens two or three times a week.

* The physical symptoms are worse although its a question if they are worse to the extent the cognitive ones. Or maybe as I suspect, the two are linked. In any event, walking is slow, slower in unfamiliar environments, about an hour of activity results in feeling hung-over, very flu-like symptoms. So I get up and feel OK/good and set about doing housework but within an hour I am feeling really green, unsteady, I fall alot, stumble alot and a fog descends on my brain. Doesn't lift until sleep.

* Have less control over my limbs or to be more specific, I lose control at more unpredictable times, although overtaxing my brain seems to trigger it. Stumbling, hands out of control, lose the ability swallow reliably, stuff like that.

* What I was referring to as expressive aphasia I now just call aphasia since I am catching bad slips in comprehension. Just this evening Beth and I were discussing some plot point on Law and Order and some key element revolved around a bruise the victim had on her right side. When I heard that my brain went into fits because while a bruise on the right side made perfect sense with the evidence and plot, for reasons I don't know my brain kept hearing "left" instead of "right", even with I was trying to argue the point with Beth, while my brain kept saying "left" my mouth kept saying "right"....it was only after going around in circles for over a minute on this that I realized what was wrong...

I feel fog coming on so I may and probably will update this later...

* My total disconnection from time has resulted in me cooking very few meals where before I cooked them all.

* I find for the first time, new books, movies and even TV shows are beyond my capacity to enjoy, let alone tolerate. We now have all of the top movies from the past six months sitting on our media server...completely unwatched.