The Republican Party Has Finally Done Something I Thought Impossible: They Turned Me Into One Of Them. 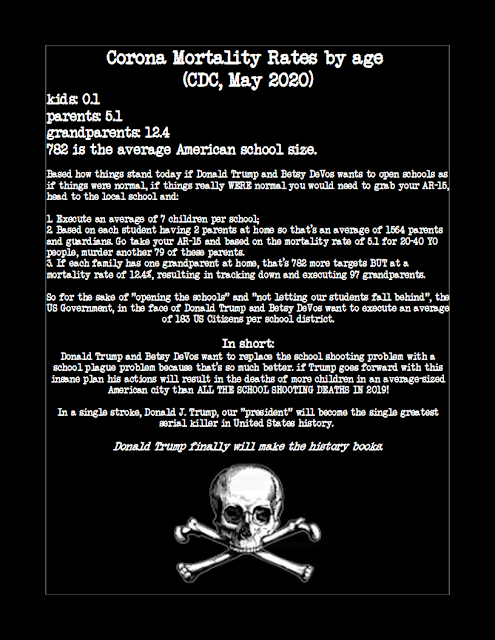 I think that the Republican Party has become the Grim Reapers but not like I think they hoped it would turn out...

They have turned me into the same kind of heartless bastard they have perfected over the past four years...

Why is this so fucking hard to understand???

I know my math skills have not been that great since the dementia set in, can't help working with broken tools.  I know I am always the last one to figure stuff out. And I don't even have a kid at home anymore...yet I get it: sending the kids to school right now is a form of selective, elective suicide. What gets me is why folks with parents living at home, with kids of school age, why these people don't get it. Ask a teacher: want to catch a nasty dose of whatever bug is making the rounds of happily asymptomatic school kids? Just hang around a class of them for a while. You get the bug for sure but it always feels like it is 10x stronger or worse than "last time." We have all felt it, we have all recognized we caught it from kids, so we all pretty much have half the facts we need not to be stupid.
Then if you check the mortality rates by age group at the CDC (still 1000x smarter than Trump on Trumps best and their worst day, why anyone believes the chronic liar that Trump is blows my mind) and you will find that kids of school age have a mortality rate of about 0.1%, folks who are of the age to be parents of school age kids are in the 5% range and grandparents are just above 12 percent.
So for an average sized American school there are some 700 souls; send them to school now (in a month will make zero difference) and right out of the box you have killed at least one kid, according to math. However most of the remaining 99% will remain symptomatic and keep going to school, ride the bus, eat in the cafeteria, etc. By the end of two weeks, the virus is certain to exist in every child in that school; and every day those kids take it home to Mom, Pop and Grandma. Only in this school, 5% of the parents get killed off, something like 1500 people. At the same time, say half of these homes have a single grandparent there; 12% of them will get sick within two weeks and be dead within the month.
As bad as that sounds, its really not the bad part. See, this whole charade was engineered so Trump could force people back to work against their will, and when that happens, the parents that didn't die take the virus to work and within two weeks the workforce begins to show signs of weakening, folks stop showing up for work, a few thousand more workers will die from the corona-virus and that will be too much for many folks who will say screw the Republicans, I am not going back until its safe and they have NO PLAN, never did.
This is pretty simple and should be easy to understand but this kind of clear logic absolutely confounds the Republicans, Trump and his supporters. While it is so very easy to fall into the trap of thinking his supporters are just as stupid and moronic as Donald Trump himself is, I do not believe that to be the case. If they were that stupid as a group you would be reading about the Southern half of the United States shooting itself in the foot while aiming at each other.
No if they are not idiots then their "disbelief" is intentional stupidity, the very definition of the word "disingenuous": 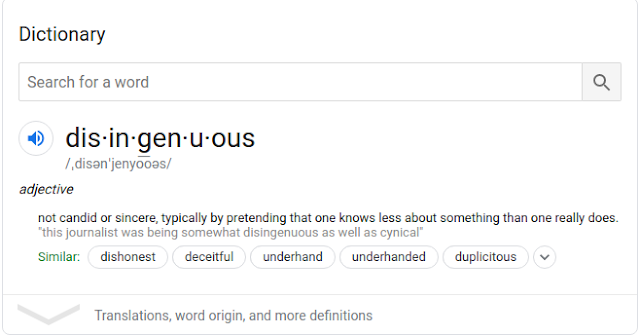 So I am pretty sure that regardless of what they claim, the Laura Ingrahams and Tucker Carlsons and Sean Hannity's of the world know damned-well the president is full of shit WRT the corona-virus, the only way any of these "models" and plans have any chance of working is if EVERYONE does the mask thing, EVERYONE does the distancing thing, EVERYONE puts away the "asshole yearnings" for another time.
Since I know they won't do all that, because they haven't so far, there is no reason to think they won't explode the virus across this country many hundreds of times worse than it needed to be and thats when the event will happen that brings us to the point of this article:
The MAGA/Republican crowd is going to get sick, they are going to want help, they are going to demand it for that matter but it won't matter because in the name of "owning the libs", they succeed in getting their entire families infected and the predicted number start to die. So they are pleading for help, mainlining hydrochoroquine (sp), sacrificing calves on the altar, the whole nine yards. Whole families will get wiped out and the ones that are only partially gutted, how many of those MIA family members were the primary bread-winners of the household? So more businesses start to fail.
In the face of all this chaos, all this carnage, I know what I am supposed to do, supposed to think, supposed to say. However after being force-fed Republican bullshit for almost four years now, they aren't worth saving. I find that I just can't get worked up too much if every damned MAGA and Republican nut that flaunted the safety of everyone else for their own comfort dies alone, screaming in a tent on a ventilator. That is a horrible thing to think, let alone say. Well Trump and his ilk have used up any humanity I might have left for them. So the way this is going, it is not unrealistic to think great numbers of Republicans and Trump supporters will be dead by November, which ironically makes mail-in voting all the more important to them in particular and Trump is trying to take that away too. He is truly unbelievably cruel to everyone, including his own people.
But then anyone who mocks their father for having dementia is a piece of shit that doesn't deserve to breath air on this planet. 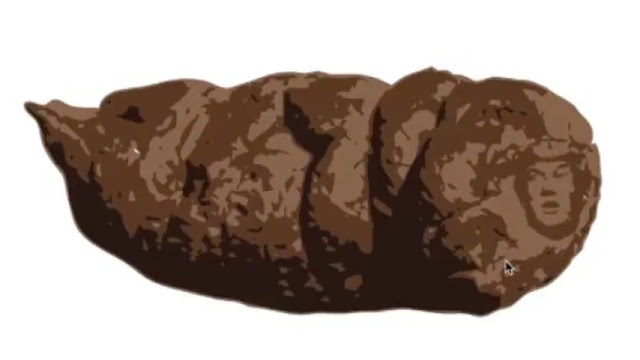