Thomas B. Modly is antithetical to the concept of esprit de corp drilled into every service person 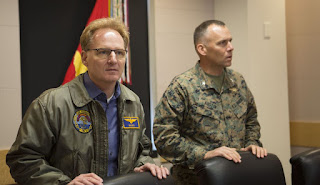 This is the moron that fired a Naval Captain for protecting his crew.

One of the worst parts of dementia is expressive aphasia, it takes your words away and makes them hard to use. Yesterday when I read that Thomas B. Modly fired Captain Brett Crozier for trying to save the crew of his ship, the USS Theodore Roosevelt. Then today Modly actually stood up before the crew of the Roosevelt and called their beloved Captain stupid directly to their faces.

Update 07 April 2020: Modly resigns. He tried to apologize, tried every trick in the book to save his own ass but like many Trump sycophants, was abandoned at the first bad press, which this character got in spades. GF riddance you soilless bastard, You are so unfit for commanding a row boat I am amazed that Trump ever got you in...oh wait, McConnell et all are STILL doing his dirty work...

This is wrong on so many levels; as a veteran I am ashamed of our leadership. They buckled under the pressure of the man-baby Trump and did the unthinkable, fired a Captain for protecting his crew which is arguably one of the most important peacetime jobs any officer can hold.  And this ass hat AKA Thomas Modly had the unmitigated gall to try to call their former commander stupid directly to their faces. First, even IF what the acting Secretary for the Navy said was true, it had no place in a discussion about firing the Captain for a lesser offense. I cannot explain his actions as he is supposedly a Naval Officer but if he is, he was clearly asleep in class at the academy the day they taught something essential to every serviceman or woman out there: Esprit de corp, a fancy French term meaning I got your back and you got mine. It is a fluffier way of saying what soldiers in the Vietnam war would say: Keep the faith, baby. Keep the faith that we will watch each others backsides and get through the worst of everything together. Lots of words to describe a very simple feeling...and no matter how you phrase it, Thomas Modly has broken the faith.
Apparently I am not alone in sensing this: on his way out the departing Captain Crozier received a standing ovation and cheers from his troops, because they knew the quality and character of the man far better than political hack Modly ever would. And Modly knew he fucked up because he said this decision could cause the shipmates to hate Mobly, possibly for life. Yet all in fears of angering Trump, Modly broke the faith and fired a courageous leader w/o trial or investigation.
From the prospective of this veteran, Modly needs to be fired as he is wholly unequipped for the job of Secretary of ...anything, both emotionally and clearly from a job-understanding standpoint. Another example of Trumps fine "actings" he loves so much since he can stick unqualified pieces of shit like Modly in positions of responsibility.....and the same stupid, brain-dead ideologues like this are what McConnell is flooding our judicial system with, so expect many really stupid things like this for the foreseeable future.
Fuck you very much Republicans and from every man or woman that ever sacrificed anything in the name of esprit de corp, a double fuck you to Thomas Modly, for taking down a far better man than Modly will ever be on his best day...that is the only way Trump appointees can get ahead is by soiling and taking down better people than they are, just so they don't look like the losers that they are.
Jeff Cobb
Sgt USA (disabled)
Email Post