From the perspective of an American Veteran, Donald Trump brings shame to us all 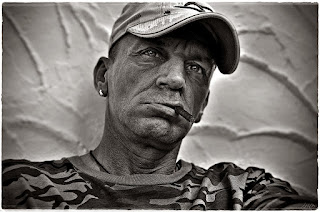 I wanted to wish my fellow veterans a happy Veterans Day but I simply cannot. What we fought and died for is being sullied by Cadet Bonespurs AKA Donald Trump every damned day.

When you are a soldier and stationed to a country and culture not your own, you can spend your time whining about it "not being like home" or you can learn to adapt to and embrace other cultures. Seeking out qualities of non-monetary value in others is the trait and skill of the diplomat, something Trump the thug has no grasp of at all. Since Donald Trump has never risked anything in his life, he doesn't grasp the job of the soldier at all. For him, we seem to be a club he can swing to get his way.

The job of the soldier is the job of the armed forces which is to kill, pure and simple. No I don't mean we are or were mindless killing machines; rather every soldier is trained for two skills; their "occupational specialty" which in my case was prehistoric electronic stuff but also every single one has the secondary training in combat. It should serve as no surprise; after all, it is the military and that is its job, has been since like forever.

Now Trump is sending folks with that training to somehow police the border down south. That is not to say soldiers will go down there and start shooting people, of course not, and thats Trumps other problem. Since he is Command in Chief, Trump can give orders all day long. At the same time, written right into the military code of justice is the line that went "a soldier may refuse to follow any order he or she deems unlawful." In other words Trump can give all the illegal orders he wants but at the end of the day its up to the military to follow them or not. Normally this is not a problem but kids, these are not normal times.

However soldiers are still humans because we all started out the same way and when faced with situations outside of their training, some will adapt and some will fall back on what training they do have, and that could lead to problems, because as soon as a single migrant gets shot, that will be game-up. Trumps attempt to use the caravan as an election dodge will be laid bare for the bullshit it was simply because if they ARE invaders, any military person will laugh at you if you suggest sending 7000 unarmed civilians up against twice as many trained and equipped soldiers, you know, the folks who are trained to fight and kill. Its no invasion and there is no military component to it so sending an armed military force after it is a recipe for trouble. Since Trump never looks at the consequences of his actions, these just may come back to bitch-slap him when he expects it least. Its like Trump has the same 12 year-olds understanding of the military as he does out of governance, like he read about it in a comic book or something. The only ones he is fooling are other people with the same pre- adolescent understanding of life.

What began this article though is the bigger reason this is not a good Veterans Day; Donald Trump only thinks of himself and has NO problem burning bridges of good will and cooperation with the other residents of this planet that took generations to put into place. This battle is going on all the time; for every time you see Trump acting like a child in front of world leaders (and sucking up to other "leaders" that shame anyone with any dignity), there are thousands of soldiers around the world doing the work Trump refuses to do: working with local cultures, being ambassadors for our country and generally not being a complete asshole. I have made so many good friends from around the world I wouldn't trade for a truckload of Donald Trumps. Why? Because like myself, these people also saw outside their own accepted ideas of culture and discovered as I did that we can all become more than the sum of our parts, to coin a phrase. Trump never got that; he has never needed to cooperate with anyone so now he has zero skills at it.

Trump and his (jock) supporters think our country is strong enough where other people don't matter which is as foolish as a strong arm not realizing it needs feet to get anywhere. Yet he is allowed to go stomping around the world, screwing up agreements and treaties that took a long time and lots of sacrifice to achieve, leaving the world with the opinion that Americans are Just Like Trump. In doing so, he/they are invalidating anything any veteran has done in other countries over the decades...its like when he became president, Trump honestly expected everyone to respect him all of a sudden, because at that point he was banking on generations of respect and trust built up by last presidents, making the office of President of the United States actually mean something. He has since pissed away all of that respect and good-will so now it seems any clown is qualified to be president and as such, is no longer a special position of any kind.

Its going to take a long time for us to build up across the world what this cretin has torn down with such aplomb (and with so much enabling from the Republican Party).

Happy Veterans Day, for what it even means anymore...