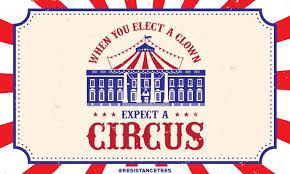 Well, for the first time in 30 years I voted. As evidenced by my voting record, this isn't something I like to do; in fact when folks like me have to take a hand in things, its because the last people we elected simply are not doing their job and so we need new people in those positions.

For a long time our countries political engine just ran and like very reliable software, was greatly ignored, so long as it worked. Well things are clearly not working in this country so its time to change things. Donald Trump and all he represents is the true source of pain...think about it: the only thing positive he and the Republicans have to offer on this election day is a tax cut and booming economy. He/They have zero idea how they will pay for it all and yes it costs money. They think they can take it back from "entitlements" and they had the chance to do it for two years now because no one had the power to fight back. An even with the wind at their collective backs, they could not do it. Now, with them losing the total majority everywhere (as is likely tonight), how THEN will Trump pay for all of his gifts to himself and his friends? He can't and won't. And that's the best thing they have to brag about going into today, a robust economy that is as much a charade as is the largess of the friend who doesn't mind bouncing checks.

On the other hand, we have racial, societal and religious divisions in this country as never before...as in never before Trump. More than that though, Trump is trying a page from Putins playbook and trying to rule through fear. If he can't make people fear him, he will make everyone else afraid of them.

The hardcore Trump supporters cannot be reached with facts and truth and I think I finally know why. Watching a little too much Law and Order: SVU reminded me of how people in abusive relationships keep coming back to their tormentors, even when they logically "know" that person is the worst for them. Ask the farmers hows it going, or anyone not-white or anyone not-Christian...or anyone not Republican. That is the only explanation for the farmer in the news video claiming he is going under due to Trumps trade wars and yet he would vote for him again. Multiply that by a few million and you have his base.

So its not like they will wise-up, learn a thing or two and suddenly see reason. Since this is not a presidential election year we cannot remove Trump directly through voting, but what we can do is be the checks and balances that stop his more egregious behavior....until we can kick him out in 2020. That means voting out enough Republicans from as many positions of power as is legally possible. I have little doubt what will happen for the next two years; Trump and his Gang of Idiots will be busy fighting court cases, investigations, and in short, will be forced to spend all of their time fighting a war other than trade, immigration, civil rights and so on. In other words, they will be forced to spend the next two years fighting the wrong war; they will be too busy with that to cause any real damage to things that matter. They will be neutered and for the near-future, that will have to be good enough.

* Were I to live long enough, it would be interesting to see how many future generations of Trump will be paying for Cadet Bonespurs little adventure.

* It will be interesting to see how many of the current Trump sycophants in congress change their allegiance November 7th.

* Sadly, rogue Trump supporters or white supremacist militant factions seeing their 15 minutes in the spotlight fade might use this to strike out at those they perceive as enemies.

* How many Republicans are going to shift political stances on everything from health care to immigration to foreign relations. This will happen the instant they detect Trumps influence not being a benefit anymore.

* To see when Trumps "Underwear on the lawn" moment will come. This is not a man who will ever be described as "graceful under pressure." Compounding that is the almost-certain case of LBD that is setting in with him. It explains all of his "Executive Time". We patients need our little "safe room" of sorts. However there are limits to what he can handle and once his time is being scrutinized more, he will have less safe time and will end up mentally dodgier by the day. As sleep deprivation takes its toll, the dementia sets in Trump will have a break that even Sarah "I can lie about anything" Sanders won't be able to cover.  I am guessing before April Fools Day this will happen. Oh the irony.

If you haven't yet, get out and vote, crazy or not. 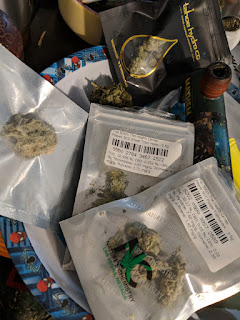 So for the home stretch tonight we are having bowls of Blue Dream (seemed appropriate) topped with high CBD extract.... 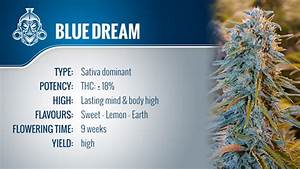 It is almost over but the crying....

As for the morning-after, yep it went about as I expected, although black-listing Jim Acosta from CNN was a rather bold-yet-stupid move. Expect alot of chicanery between now and the end of the year, the shell game with the Whitehouse is just beginning. With election past there is nothing to lose so with Sessions booted, they can try to take the Mueller investigation away from Mueller. They can try...but one thing that is obvious to the most casual observer is that this Mueller is a pretty smart cookie, and based on what I have seen, several orders of magnitude smarter than Trump & Co. On a slow day. So for every thing that pea-brain thinks up, I have zero doubt Bob Mueller has a strategy for that. Look at the mountain of cases he has let roll downhill to the state level, putting them out of the reach of the Whitehouse while at the same time ensuring they go on even if he does not.

Make no mistake though, he is saving the gems for himself. That boy don't work for free ya know. Now all that remains to be seen is if Trump has his "underwear on the front lawn" moment before or after the New Year.