Greetings kids, it's time to talk about something both much, much lighter than our usual fare and near and dear to my heart: Making Stoner Food.

Stoner Food? WTF?
Stoner Food as a defined item could be described as "food that you are able to concoct from what's on the shelf, tastes good, is filling and most important of all it is simple to the point that you can do it with half your brain tied behind your back."

OK That was a mouthful but that describes Stoner Food in this house; in many asthetic ways, stoner food accomplishes many of the same goals as so-called "comfort food", scratches the same itches, it is simply nowhere as complicated to make. As a bonus, "Stoner Food" doesn't describe one specific dish or recipe, but rather a whole universe of plug and play opportunities for adventure in the kitchen. Best of all, because its safe for stoners to make, its safe for the disabled dementia patient as well!

Key tenets of stoner food cooking are:
* All shelf-safe long life ingredients.
* Ingredients must be available 24/7 (a la something convenience stores would carry)
* No timing
* No measuring
* Little to no thinking
* Nutrition need not apply but thats not the point, right?
* If it can work for stoners, it can work for the disabled....

I started coming up with Stoner Food back in the early '80s when I and another soldier (was in the Army at the time) shared a house miles from the base out in the country. We both smoked pot and that made that house party central.  And as stoner nights would inevitably go, come midnight or so everyone is dying from the munchies, back then Burger King was playing those fucking "Are You Hungry?" commercials every ten minutes on the TV and there is no prepared food in the house to eat.


Everyone is too stoned and/or paranoid to drive anywhere to get food...and yet people are starting to nibble paint chips from the wall....

So I did what I ended up always doing: going into the kitchen, looking at all of the available ingredients and using the force would concoct something pretty tasty and definitely filling, two key things you need in your SF. I had no cooking training nor shown any inclination in that direction to that point, it was more an act of desperation. Basically it started like the first time I was just mind-blown and so made my second mistake, opening a cook book, which every recipe called for shit I didn't have. Just made me hungrier, not conducive to clear thought.

Then I started looking at the basic finished dishes and realized I could break them down into component parts: meat, veggie, starch and dairy. Starch included most carbohydrates from pasta to rice to bread. I just thought of it as starch, as much as I thought of anything at all in those days.

So the next time I hit a situation where I felt I had say 4/5 of the things I needed to make something, I took a hard look at the missing items "category" and after careful consideration of the only other choice, I swapped one form of starch for another and just went on with my day. And while unexpected, swapping broken al dente pasta for the missing rice worked out and the plates were clean at the end of the night.

Me being me I started looking at all the cooking and realized that you could stock a small handful of cheap items and by swapping "components" of the recipe allowed the small handful of ingredients to mushroom into a cornucopia of meals. One other kinda surprising but not constraint on Stoner Food ingredients is that they also need to be available 24 hours a day a la 7-Eleven or convenience stores. The kinds of things they stock. And things they are dirt-cheap and at least vaguely nutritious. I said vaguely didn't I?

So you can stock your cupboards with a few basics to fill out each category:

Meal Base: Top Ramen + 1 can of condensed soup.
Brick ramen is really cheap and comes in a good variety of flavors; I get big variety packs from Amazon.  As for soups, the core base soups are:
Cream of Chicken
Cream of Mushroom
Cheddar Cheese.

Second tier soups are:
Any vegetable or chicken noodle type soup. Stuff like baked potato, leave it on the shelf.

Now at a bare minimum, you prepare the ramen to my instructions, turn off the heat and stir in the soup.  Stir well and you can eat a basic spicy mac and cheese meal based on this.

Thats it. Anything else you might need would be found in any kitchen such as margarine, basic seasonings, etc.  Water, that kind of stuff.

So in todays example, this whole corona virus thing was getting me down and needed some comfort food. Today I stuck with the basics. From my ramen drawer I took a Special Chicken Flavor (the special part is red peppers I think): 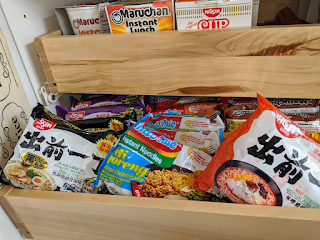 And to go with it, a classic: Cheddar Cheese soup: 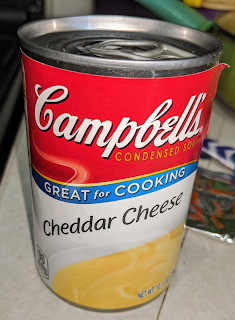 I crushed the ramen before opening the package and dumped it all into a sauce pan. Added the seasoning packet and covered it (barely) with water. Barely is all you want because you want this to cook the noodles and kinda bake the seasonings into them, not really having this be "soup."

Bring this to a boil:

Now I if I just wanted the base model of this I would just add the soup now but I wanted to kick it up to notches unknown so went hog wild in the pantry, yielding canned tuna and a can of peas: 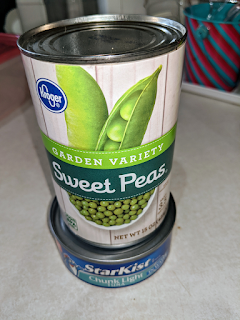 Once the ramen cooks down, turn off the heat and add your extra ingredients, in this case peas: 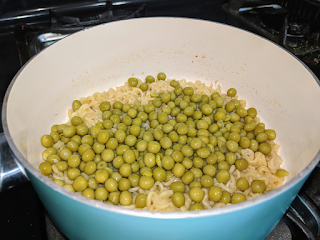 And then the tuna: 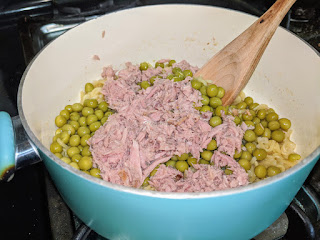 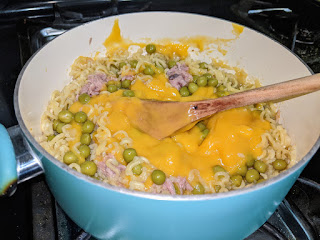 Turn heat on medium and stir frequently until everything is melted and combined. Turn off and serve. By itself this will server four and sticks to the ribs.

That should get you started on a whole new and economical taste experience. With the hoarding and stuff from the Corona virus, you will be set with whatever is in your house....