CBN: The Cannabinoid that you need to learn about 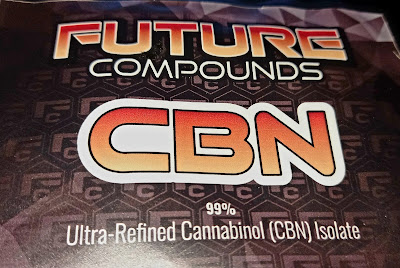 Greetings Kids! Jeff here with a pretty short but heart-felt endorsement. Regular readers will know how hard these later columns are getting for me to write, so understand the importance I put on getting this information out to other patients. Now I will pass on the best information that I have but if you have pointed questions, ask someone in authority like the folks at Future Compounds. I am here as a consumer. I use CBN to augment my normal LBD and Parkinsons regimen. CBN can do alot for you but for this article I will focus on one need that many of us have, regardless of malady: lack of appetite. Don't eat and you don't live. When your appetite is in the shitter, its easy to just eat some of "whatever" just to say you ate something, even eating the bare minimum. Enter: CBN.

CBN is another of the cannabinoids available not just from cannabis but from hemp as well. However unlike every other CBD-related thing I have tried, CBN is the only compound potent enough that you don't have to imagine the effects like you must with most CBx products. I would put the difference this way: with CBx, you have to really want it to work, really want that pain relief or appetite help or whatever and later sometimes you have to convince yourself of efficacy. Not so with CBN: proper dose of this and you have all four burners on the stove going while mixing up your mixing bowl of Captain Crunch, "just so you don't die of starvation before the rest of the food is ready."
You know what I mean. You can tell its working the same way that the crew of the Titanic knew they hit ice.

How Do I Take CBN Isolate?

Again, this is just me. I use the CBN isolate in one of several ways:
* It can be sprinkled on a morning joint to jumpstart the appetite for breakfast, the most important meal of the day or so I am told. Not much, 1/4 to 1/2 gram is enough for most days. Works damned-near instantly too so great for nausea.
* It has been decarbed so it can be digested. I make my own RSO anyway so we have gelcap fillers here. This means that if I really need some stronger help and longer-range efficacy, I pack a half to a full gram of isolate into a gelcap and knock it back with coffee. As for the taste itself, it is far better than RSO, thats for sure and overall wasn't unpleasant. I know folks who can smear RSO on bread and eat it; personally I would yack if I tried that. Plus, this isolate can be really fine and as such can be rough to get down from a moisture standpoint.  So....gelcaps.
* I also sprinkle a half gram or so between layers of flower in my dry herb vaporizer. Good news is, it makes any flower you stick with it act like it cost 100 bucks more. Only downside is the isolate once its been vaped gets black and tarry, just makes cleaning a bit harder. That said, a flower-CBN-flower combo in my Arizer Extreme Q cyclone bowl and I am assured three massive, packed thick white bags of what I call "100mph vapor". Put your seatbelt on.
* One other way I use this, not exactly medical but it does aid in that as well. These days money is scarce, yet you know if you need flower and snag a cheap ounce, your are going to get a cheap ounces worth of enjoyment from it. Lower potency and usually older dryer stuff which burns the throat. The lower potency stems from the fact that most of the breeding since the 70s has been to jack up the THC levels in cannabis strains....but in doing so, many key cannabinoids like the whole CBD family, resulting cannabis that was technically higher in THC by a few percent (although enough to give Congress conniptions) at the expense of satisfaction. Its like they made a steak in a steak dinner twice as big but at the expense of the entire rest of the meal. Baked potato? Gone. Bread? Gone. Drink? Gone. Just lots and lots of meat. The problem is that yes they made the higher THC strains stronger but that only means there are still the middle-tiers out there that not only don't have the sky-high THC, they are still products of the generations of breeding out of the cannabinoids.  This adds the final insult to budget cannabis: its old (low potency), harsh (dry AF), tasteless and the THC is just so-so.
However, what I do is snag say a 99 buck ounce and inspect the buds. If its floor-sweepings or so-called "smalls", that I just turn into RSO because I can turn 99 bucks of cannabis into at least 160 bucks in RSO (4+ grams per ounce). If the buds are OK however, I put the cannabis into a Mason jar, drop in one of those moisture packets they use for humidors and close the lid. Next morning, the buds of perfect as if they just had the best cure ever. Then as I use this flower, I make sure every joint, bowl and vaporizor bowl has a nice whallop of CBN in it. The end result is this pot tastes better, hits better, sedates better and longer too.
So all of this would be great but still worthless if the company behind this wasn't the best. Thankfully, that's not the case with Future Compounds of Las Vegas. They have delivered a consistent product of superlative quality and it was on my doorstep many times faster than the next nearest competitor that I had tried. Combine that with the best pricing I have seen to date and you have a sure-fire winner on your hands if you add the CBN to your regimen and the thing is, I know I am getting the best product at the best price, not to mention the best service anywhere with FC. So check them out. Then feel free to laugh at the stupid PSA for CBN I made using my lunch....hey the thrills are cheap around here!
BTW I have no relationship with this company other than customer, I am just so happy to find someone reliable that I can live with, I get giddy because now I know I don't have to waste time I really don't have left seeking out a reliable source for CBN for after I can no loner make decisions...
Future Compounds/CBN
My stupid PSA:
Peace,
Jeff
Email Post