The Disabled Emperors New Groove: In Praise of the Table-top vape 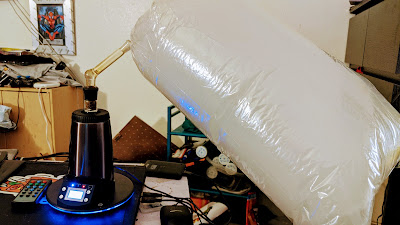 I thought I was done with this. The Lewy Body Dementia has made even writing an arduous task which is why I rarely do it anymore. In point of fact it takes a damned motivating reason to take the time and effort to assemble anything like a product video or editorial/tutorial on anything. I fear those days are mostly behind me.

However I came across something that fixes so many things in the life of a disabled person who grows cannabis for medical reasons. While most medication can be taken in pill form, one of the pluses of using cannabis for medication is the speed of efficacy. The THC goes from the lungs to the bloodstream to the brain in a very direct way, much more direct than any trip a pill might take. In addition to the speed, often cannabis is used for appetite or nausea control....but pills on an upset stomach is usually a trip to the bathroom under the best of circumstances. Cannabis can stop that and going in thru the lungs means any problems with the stomach are bypassed.

Finally when you are growing your own meds, you are often doing it in your own home using basic home made methods, making advanced processing of your cannabis problematic at best.  In a perfect world you would have your flower converted to RSO, wax, hashish, etc, all concentrated forms of cannabis and you would just med-up that way. We don't live in that perfect world, you have to make do with what you have..

The quick and seeming obvious answer I hit years ago was to use a method called "dry herb vaping" which at its simplest means to gently heat your cannabis to around 300-400 degrees F which is hot enough to release any active compounds in the flower in vapor form but not hot enough to ignite the plant material, avoiding carcinogens. This vapor is whispy, thin and white..you inhale, hold and release as usual.

This does work, I know because we lived in a smoke-free apartment for a few years and used this method to stay medicated every day of the week. However after decades of buying many vaporizers that make great promises, both cheap and expensive I had largely given up on finding the perfect one good enough for my daily needs and use. Most dry herb vapes require the learning of a breathing/toking method unique to that device so that the hot air moves over the flower evenly and at an even rate, otherwise not enough flower is vaporized and you get mostly hot air or too much is and the result is actually very little hit or worse, a burned tasting thing. If you got really good with your vaporizer and it wasn't a totally broken piece of shit, you could sorta get by...but most just had too many design defects and since many of those are related to the fact that most dry herb vapes are also portable. That means charging problems, power problems (or lack of it), unreliability, small loads, uneven vaping due to small cheap parts, not to mention a funky taste if the oven isn't constructed well.

Sadly the only alternative to the stuff I could afford was the vaunted Volcano, $600. The rest tried hard, I spent up to $250 on the DaVinci Ascent, it didn't do any better than the 25 buck Black Widow from Asia...recently both the missus and I were having the rough throat issue and decided to take another look at the market...some noodling later decided on a table-top model to avoid the problems of the portables and after some digging, found the Arizer Extreme Q, available for between 109 and 270 bucks US. I got one for 109. I did my due diligence or as much as I can anymore and noticed the Exteme Q got consistently good reviews, only complaints came from those complaining it wasn't a Volcano at 500 bones more. I watched the YouTube videos, saw them using the whip as I had done (and not been happy with) and then this guy fills a bag with vapor and tokes it down. That bag was FULL too. Then he did it again, same bowl, bag filled with vapor. Just looking at it I could tell the Exteme Q made more and better, thicker vapor out of one bowl than any vape I had tried in the past, hands down. So after reviewing it with the missus I found the best deal (CityVapes of Toronto) and had one sent.

Here is a quickie video I made to show my friends how easy and reliable the Arizer is to use. It is not a review nor any kind of thorough walk-though. Rather its a quick jump start like the minimum steps to dry herb vaping nirvana....

To say we were amazed is an understatement. We are both 4-decade tokers and have a non-trivial tolerance. It took a few tries to get the hang of the bag method and now that we do, I would vape no other way. The bag fixes so many of the valid complaints about vaping dry herb: lack of good/effective/powerful hits, the work it takes to often result in only a mediocre lift, unreliable equipment and more. By filling a bag with vapor (pushed thru the flower with a small fan), any discomfort of the throat is eliminated. Further, by squeezing air out of the bag ahead of time, you get nearly concentrated vapor, whereas with a whip or hand-vapes you get a lot of hot air along with the small amount of vapor you extract, leading to a less than stellar hit. With the bag, the vapor is not just concentrated but cooled as well. What this means is you can take in the biggest, coolest, cleanest hit you can imagine and in doing so, you get WAAAAY more vapor than you ever have before, reaching parts of your lungs that don't normally experience the smoke or THC, meaning you got more out of this.

If all you have experienced are the older toke-based methods of dry herb vaping, you seriously need to try a device that leverages the use of the bag, be it this one (Arizer Extreme Q) or the Volcano or whatever. Just do it. I will tell you about the Arizer here but the principles and ideas will be the same whatever you use.

Also, if you get one of these, you absolutely have to do a Wake N Bake with this bad boy. After four decades of toking, this gave me the best wake n bake feeling in years. Many years....just make no plans for the day.... 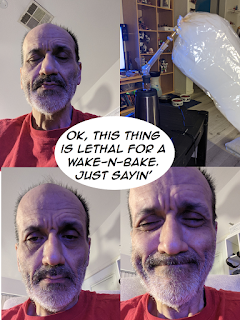 Going with a bag changes everything; with every form of dry herb vaping before this you had to have such laser-precision with your toke, too fast/hard and the hot air doesn't have time to vape the meds and you get, you guessed it, hot air. Hit it too slowly and not enough hot air moves across the flower and again, crappy underwhelming hit. In the end you have to put so much effort into the sesh that any value from the meds is lost if its ever attained in the first place.

More with the whip-style or hand-vape you are actually directly hitting the heat that vaporizes the meds, better than  smoking but still not great.

Finally with the other types of dry herb vapes you are on the vapes schedule. Once the sesh starts you gotta keep hitting until the bowl is gone. Skip or wait between hits and its lost medicine and this medicine isn't free nor covered by insurance, mores the pity.

The bag method fixes all of that. The Arizer Extreme Q has a gentle built-in fan where once you bring it to temperature, the preheated air is pushed thru the "cyclone bowl" which is a fancy name for the bowl.  This gets pushed through an angled joint and into the bag itself which is like a big turkey oven bag with a glass spout. After a few minutes the bag is full of nothing but vapor and this is good, thick stuff too. I was amazed at how long it stayed suspended in the bag. In any event, once its there you can hit it fast and deep if you want to swing for the fence or sip it very slowly over a period of time if you are just into chilling.  In either case the vapor has cooled and is very mellow to hit. That is a slight danger here; the hit is so mellow and frankly tasty that its very very easy to over-hit.

Each bowl makes 2-3 bags of vapor and finishing all three can be a feat of strength sometimes....so one other use of the bag is our version of "Aroma Therapy", just set a book on it, sit back and relax:

And I will tell you something: when you can just hit this vapor as hard as you want or can handle, its very easy to get blasted on your ass before you realize it. Vaping has historically been a nice diversion but rarely the source of any epic sessions....it was sort of self-limiting due to the constraints in hitting it. With this those limitations are removed and you can suddenly find yourself like an 18 year old in the bar for the first time. When you add to this that the Arizer makes these big bags of thick vapor reliably every single time and regardless of what we stuck in it, it moves what used to be a conversation piece to the top of the bong rack next to the 3 foot glass monster capable of causing unique lung diseases all on its own.

As if this needs to be a better deal for us, this thing takes any nasty old pot and makes nice thick, medicinal clouds from it. The shape of the flower matters little it seems. Found  a jar with Tahoe Cure from last year with a bad lid and the flower had dried nearly to dust, yet the Arizer made it nice, tasty and potent as if it were cured yesterday. The point is it makes the most of whatever you have and if you are like us, you waste a little bit with every bowl or roach.  This uses every single flake of flower you have.... 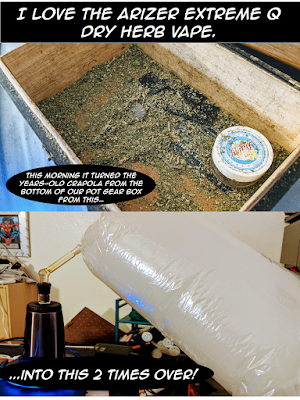 So in sum the flower goes farther, tastes better, is better on your lungs and throat and by extension is better for smoke-hostile environments. In this case, the Arizer Extreme Q is reliable and makes very very solid bags of vapor guaranteed to take care of your every medical need. And at 110 bones (if you search you cand find deals) its half the price of a DaVinci while working 100x better and 1/7 the price of a Volcano. For one or two people (like a disabled couple f'rinstance) this is the perfect size and perfect for the budget. Not to mention it will pay for itself over time with the flower it saves.

I highly recommend this device for my disabled readers......