Trump has reached the low I never thought he could. 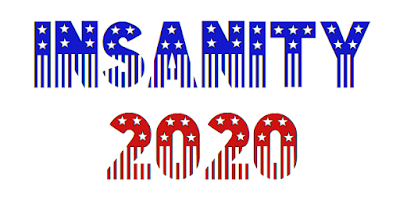 This is it folks, this is the rubber meeting the fucking road time. Insanity 2020 is coming to fruition and it could not come at a better time. Much ink has been spilt over the many dividing ideologies Donald Trump professes to support....but to me, none of that matters anymore.

Donald Trump has revealed himself to be such an odious, unforgivingly assholish person undeserving any respect, let alone the highest office in the land. A man this broken has no business governing others.

For me its really simple: this son of a bitch tried very very hard to swindle the family fortune from his father...with dementia....and Donald Trump not only knew it, he was trying to take advantage of it. This reaches home; there are like 17 million of us out there, most of which can still sign a ballot..and for every patient there is likely a caregiver too....so when Trump is mocking and stealing from his father, its like he is mocking and stealing from us...and any caregiver out there worth their salt will recognize this behavior as unforgivable.

When this happens anywhere else, where a person with dementia gets taken advantage of and loses everything, that culprit is run out of town on a rail. For a reason; there is no excuse for this kind of behavior, not on this planet or any other. He also openly made fun of his fathers dementia as well.

Face it: Donald Trump is a total piece of shit. For me, it goes no farther than that, there is no shovel big enough for him to dig his ass out of this. He owns it..

So for me, any vote for Trump is a vote for the worst kind of human being ever. I get it most folks don't get dementia or the hell patients and caregivers must go through every day...at the same time, knowing this I cannot forgive any caregiver, nurse or physician if they DO cast a vote this way. To me, you are now also that same piece of shit I pray I never have to meet in a professional situation, because folks like you are anything but professional. Bleach, indeed.

I bag on Republicans but I know not all Republicans are evil or bad any more than I think all Democrats are nice. It's funny: before 2017 people tried to live up to the expectations of others. Since then, it seems they are living up to the worst limitations of their ideology. But here is the thing: any readers of this blog (which means you know WTF dementia is and is not) will rise above their politics and remember the piece of shit currently asking for more time and the free pass is the same one that belittles your profession as well as those for whom you care. In other words, politics doesn't, can't matter here.

We need to get this piece of disrespectful shit out of office and there is nothing he or the Republicans can offer to counter that stink. Now is the time, voting is the answer and best of all it is already starting in many places and while the Republicans will do their best dirty tricks to foul up the mail vote, do it anyways and get your vote in early so their OTHER bullshit tactics fail too. Count for something one last time...in this case, you could end up saving generations of not just Americans but folks around the world....

The key thing here is kids, get out there, make that difference once again and you can remove the pain from your life that publicly considers you to be an enemy of the people....mother-fucker, we *are* the people.