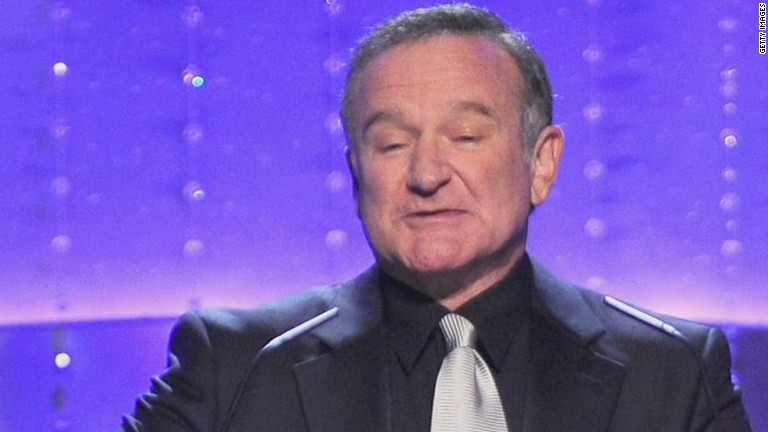 Greetings, Jeff Cobb here. As observed in this ham-handed bit of reporting by Fox News on the trials and tribulations of the final years of Robin Williams, the mainstream news continues to misreport this disease. And before you start thinking about non-mainstream news I would remind the gentle reader of two simple facts:

A. One of the key elements in LBD is DEMENTIA. Which means...
B. Any one of us can out-crazy people like Alex Jones on that InfoWars site, seven days a week and twice on Sunday.

Kidding aside, I need a reliable source, not a crazy one, even one less crazy than I am on occasion.  The problems with the Fox story were legion but Fox is not alone in totally missing the target on this one. What did I have a problem with?

Well, first they didn't even get the diagnosis correct, the final actual post-autopsy diagnosis of Lewy Body Dementia. It would have been bad enough if they had used the initial mis-diagnosis of Parkinsons Disease but they didn't even do that. They simply referred to it as a mysterious neurogentive disorder. All that vagueness does when discussing this is leave it as a bogey-man under the bed, something to be feared but not understood. That understanding is a key reason why Randy and I will write here, to tell you what LBD is actually like.

They listed a batch of generalized symptoms that looks like they pulled the names from a list returned by a Google search of "brain disorder". That's it; then they just list all the weird things that Robin did as things progressed and called that reporting. I am not singling them out; few places report any better on this which why we are here; the Fox story is simply the one that lit the match under my ass to write this. If you have LBD or once you learn about the symptoms, you will view Robin Williams and many others in his shoes in a whole new light. As a bonus, since dementia is what it is, some of what we describe here may also apply to Alzheimers or Parkinsons patients.

So in what way is the Fox story and others like it full of shit? Recall the basic facts of the case while you consider this:

* Dementia is a kind of strange bird. As it advances, you seem to stress it less. You miss your faculties as they go, you feel frustrated when you try to use a mental muscle that is no longer there or responding reliably. I am however less fixated on it than the normal folks around me. I know others feel this way as well. Its not apathy; its simply the recognition of the progress that is an undeniable and non-preventable stage of the disease. In the same way we know we will expire sooner rather than later to it, we don't fixate on that either...its just a date, and everyone has one.

* Dementia is turning out to be a great deal different than what I was taught (little to nothing) about it when my grandmother on my mothers side was dying from it. Dementia is WAY different. Not being fixated on something absolutely does not mean ignorant or apathetic to it. We are aware of things breaking down inside our heads, and this speaks to one of the gravest sins this article made, it played on peoples fears. First I must explain a key signature symptom of LBD that PD and AD simply don't share, or not to the same degree....

* LBD Cycles: Imagine if you had a dial wired to your brain, one that was randomly connected to things like motor skills (walking, tying shoes, etc), memory, cognitive ability and in some cases emotions and moods and in really severe cases, delusions and hallucinations. Now imagine if something or someone periodically walked by and tweaked that dial, just gave it a big ole spin. So you can wake up, confusion is set on about 8, you can barely walk to the bathroom, conversation makes little sense to you.  A while later the fog is gone, you can walk OK again, your mind is your own again. This is one way I say knowledge is power: when you are in the fog state, the world around your is confusing and when it is that way, you are simply not interested in things you don't understand. When the fog lifts, your brain works again like it used to for a time, you are interested in the world around you, curious about the news or even trying to plan a days activities. When the fog is in, you don't even try to plan anything 60 seconds in the future. So throughout the day you cycle from idiot to normal (for various definitions of "normal") and back again. Some folks have it happen once a day, some every few hours.  More will be written on this in time but for now, accept that this is how it happens. If you need a simple analogy, Google for Alzheimers and "sundowner syndrome" where an AD patient can be somewhat clear in the morning but as the day wears on they can get more and more confused until the end of the day where they have reached houseplant status. Same thing for us but it happens several times a day and it controls everything we try to think or do.

* As messed up at the above is, now imagine what thats like if you are feeling it happen to you, you don't know why, doctors check you out but if they do it when you are in an up-phase cognitively, they will see nothing wrong. Because you don't LOOK any different, the people who claim to know you best will swear nothing is wrong because if they see you in an up cycle, you not only look like your old self, you will act like it too. Everyone will keep thinking your fine and worse, if you are a class clown like me or a normally manic comedian like Robin Williams, even your crazy periods can get written off to you "just being you.". Oddly, that is the excuse I hear from the Whitehouse about Trump. Dunno what the rest of the planet thinks but for an LBD patient, its painfully easy to recognize this in others.

* Now if you DON'T know or are given a mis-diagnosis (because of the overlap, often LBD is misdiagnosed as Alzheimers or as is the case with Mr. Williams, Parkinsons), you go on trying to reconcile how the world seems to be changing around you and only you can see or perceive it. You start to really think you are insane and getting worse. If the symptoms are ignored or misdiagnosed long enough, and the patient is left in the dark long enough, suicide can seem like an obvious if last-resort solution to it. You would do anything to make the world start making sense again. Anything.

* Most people getting a diagnosis of a terminal disease have a whole lot of feelings come over them but I will bet only LBD patients are the ones that are feeling relief....relief at finally having an explanation for why things have been happening to you. This is the last pillar of the "knowledge is power" thing: there is a vast difference between knowing why you are going crazy and then dying and going crazy and dying without having a clue why. When you can put a name to a thing, you can make it your adversary and conduct a proper defense; when you can't its like trying to take a whole conventional army against a handful of terrorists that do their damage and then fades into the woodwork. Think: A cognitive version of the game of Whack-A-Mole.

When you put all that together, re-read the Fox story about Robin Williams final years and think about this from his perspective: everyone was expecting him to be "on" all the time and one of the things LBD really screws with is your ability to tell a joke. The memory side of that is obvious but LBD also can royally screw with time and your sense of timing. So suddenly his complaints of "I forgot out to be funny" takes on a slight different meaning. I totally get what he was feeling and worse, they misdiagnosed him with Parkinsons and as mentioned elsewhere here, the PD meds had the opposite effect on him than 100% of the actual Parkinsons patients which just left him worse.

I would say what may have finally drove him to end his life was he simply got tired of being alone all the time. Allow me to explain. As his dementia got worse, the world became more and more confusing to him but one thing you may not realize is, to him he was still thinking at least a little clear (because his great diagnosis didn't call that into question, thanks again doc)...so the world keeps feeling like its a little more alien to you everyday, even when you know whats happening to you. The difference is, you can accept it; without a reason, you cannot accept your brain is as broken as it actually is and when no one understands or believes whats going on, you feel even more isolated. In time you begin to learn to be your own best advisor; no one else can help you navigate your dementia but the key thing is, you can only navigate it if you know what it is and that its happening to you. If not, you can feel like your are drowning in a reality not of your own making.

If you take anything away from this, its do your own research. As long as the public in general has little idea what this thing is, even as prevelant as it it, there will never be traction on fixing or managing it.

For some actual facts about  LBD, refer to a scientific source like:

or The National Institute of Health before the cretinous fools in Washington defund it completely....they may think that they are making America Great but they are making it suck pretty badly for those who need places like this to exist...

My buddy Randy reminded me that as weak as the Fox story was, there was still a link to a better, vastly more accurate one upon which they based their story.

Thats good but kids, that just isn't a Mulligan for lazy reporting. The link helps very little if at all for the following reasons:

2. If the original story was weak and Fox was just re-reporting it, well that's lazy reporting too. That should not need to be spelled out to anyone passing even a high school level journalism class.

3. Since the original story is stronger yet the Fox story still blew it to such an epic degree, it simply demonstrates how Fox can horribly distort the facts, and thats when they don't even have a political iron in the fire. This also explains alot of the bizarre and wild opinion presented as fact on Fox and Friends....but that as they say is a tale for another time and place...