The curtain has lowered, the lights come up and the Exits are clearly marked... 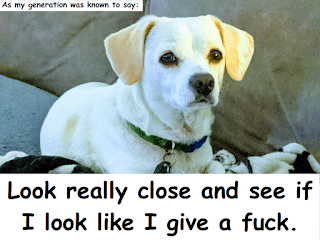 You can tell when you are approaching the far side of the time euphemistically referred to as "Mild Cognitive Impairment" when literally everyone you speak to in a given day display a kind of impatience with your thoughts and try to end the conversation as quickly as possible. Failing that they try to "outsmart" your aphasia, seize upon some failed word as the key meaning they think you are trying to say and help you out by trying to complete the thought for you, never considering if it was too hard to say right the first time, its too hard to fix or correct someone, particularly when they have a full head of steam. So you say fuck it, agree with them and sit down. Next thing you know, you are doing nothing but sitting down. The problem with that is you are not down because you are tired, you are down because you are emotionally beaten-down and no longer give enough of a fuck to stand back up again. Not yet anyways.....


Hey folks, this is more an update to the dementia side of this. I knew this time would come and like everyone else got caught up in the hope of the day. Alas, Jeff is more or less on the precise schedule I worked out a few years ago. The end of my MCI period is closer than it is farther. At this rate I really, really hope I can still operating a voting machine come November. Crazy or not, I know exactly who to thank for making me needlessly live through strife and chaos the last years of my MCI. Once done I am a house plant and its all over. And that reason rhymes with Donald Fucking Lying To My Face Every Fucking Time He Speaks Trump. When uttered just right, the reason sounds alot like that. Fuck you Trump, you made my last conscious years needlessly filled with pain and misery all for your delicate-assed ego as well as your sagging bottom-line. It does make me cackle that he has NO CLUE how much how many people from all walks of life would not put him out if he were on fire.

I still cycle as before but the window has moved. Aside from being shorter, the best the up-cycle or phase hits anymore is borderline idiot. I can muck my way through really simple tasks but my frontal lobe damage seems worse because I am startled more easily (sure sign right there), if I am not really focused on you and you speak and sentence to my face in a loud voice, I might catch from about the fifth or seventh word onward. Its like the volume is down on your voice during this time and then turned up. Sometimes I can sort out what you probably said but it is a guess in every case. And I guess almost exclusively now because when I obeyed my initial urge and ask for a repeat, what started as nice became impatience and now I just don't ask anymore; I don't care what you might have to say, its not worth that pain for all the other times, so....see graphic above.

Thats the very best the up cycle gets; I can operate the word processor but have nothing to write, can operate the email for brief periods but have little idea why or who to write to when I do. I can sorta play along with some video games but not many. Maybe 5% of what I have available; it was like 80% six months ago...and that number is shrinking but I can play along in multiplayer mode...movies I can watch, sometimes take in but most times its still too confusing to know whats going on, who to root for, etc...but I can get through it.

On the down cycle, which happens like 23 hours a day at this point, I can't play any movies, TV shows or games of any kind. They all have the same problem: in this state I am very easily mentally overwhelmed so the average game or movie would put me into brain lock or if I made if through it, I feel hung-over for hours, meaning ill stomach, head, etc.

Thing to know is, I spend around 23 hours a day in the down-phase; every one of my dementia symptoms is exacerbated: memory is absolute shit, even long-term, easily overwhelmed even by thinking too much, focusing too much, leads to migraine headaches and nausea.

I do have some meds that help in the form of the 18:1 oil but the problem of being the only one to ever administer let alone create the medication, only I am the one to think of it but the bitch is when I need it the most I can remember things the least.  So it sits right next to me, in eye-sight even but my brain just doesn't register it.

I am literally in a mentally-expired state. I look around but recognize little of what I see, I try to think of something, anything and by the time I have taken the second mental step down a given conceptual path, the first step is already forgotten and as soon as I realize that, the third or next step ois gone, leaving me mentally stranded perched on a slippery rock ion the middle of the polluted river of my mind.

The hardest thing though is the aggregate effect of all of dodgy memory, little motor skills, basically a broken problem-solver all comes together to leave you in a state that I can only describe this way:

You sit there all day, from the outside nothing is going on, on the inside you keep thinking things, be they tasks to do such as water flowers or feed the dogs to something,  light like remembering fond times from your childhood, every thought you have, every single one is like a new and crappy toy robot where you let it loose, it may take a step or two in the direction of your wishes when:

And so that idea is lost......then another idea hits you, maybe watering your plants, you start gong through the steps in your head when....

So after losing that idea, you wait for something else to come floating along. I sorta understand some undersea creatures that sit in one spot, waiting for something tasty to float along....and when one finally does, like say by now its lunch time I get the original brain-storm to make lunch. I made just about every meal in this house for decades no exaggeration.

But what to have? Then I get the idea that a tuna melt sounds good, I even get through ticking off the ingredients in my head to be sure we have everything. I am really proud at the end of this, not that I am now sure of being able to make the dish in question. In fact even though the amounts and items all seem reasonable in my head, every one of them could be something I saw in May or something....*last* May. The good part? Nothing happened to shatter my rather brittle self-delusion I was actually planning this meal well....

The I set about recalling the steps to create a tuna melt, figure out I need a pan, some butter maybe, the inevitable happens:

Its about then you just give up on the day, wait for the rest of the house to say good-night and go to sleep yourself, hoping to reset for tomorrow.

Good luck with that.

Yeah the Internet, social media, etc all are too overwhelming for me so I left polite messages everywhere and haven't been back. Only once in a great while do I check this email.

Its sort of funny, after unplugging for the first time since the mid-eighties, at first there was an undeniable detox process, not painful like opiate withdrawals. More like you don't realize how much you feel enslaved to "report in" to some forum, some social media like Twitter, Instagram or Facebook.....I still do sometimes. Something happens, I w/o thinking whip out the smartphone and take a snap shot....or video if needed. I get to uploading it to our cloud and I go "Why? Who do I have to tell? Nobody."

So I stop and in time it feels very...freeing? Not right word but....liberating? I don't know. What I do know is I feel lots better, lots less stressed, I have alot less I feel is expected of me and less stuff I feel compelled to do.

At the same time, because this idiot-mode is most of my day now, there is no denying I am in a different space where the games are little distraction, the movies, TV shows and yes even cartoons can be too complex for me. Even writing this is taking all I have and then some, I am not done really but guess what?  My brain says No, you are done MF. Thats what it calls me; MF. I think it hates me.


But yeah I am done, even if I am not. Why I don't both with email anymore, I start it, slip into fog, come back with no idea what I was saying next so either send it that way, trailing off mid-sentence and confusing the F out of the reader, or I erase what doesn't make sense which ends up being all of it and so I set about trying to write a more complete version of what I was writing about but dammit-all anyways wouldn't you know it but right in the middle my brain goes south, I am lucky to even hit Save before exiting and often losing the ability to operate the computer at all.

And next time I open my mail client I am faced with the partial thought and I have to decide: send it as-is just to get it out of here or erase the confusing part and start over?


Yep, lather, rinse, repeat. This leads me to the only sane solution there is: apathy.