No thanks for the memories (I earned each and every one) 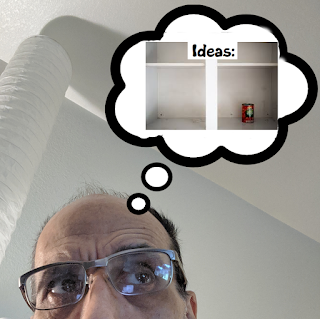 Memories, the stuff from which we shape our lives, personalities, self-assessments of wisdom and that which warms us in later years...when you have dementia, these can be your greatest joy and source of emotional warmth or be the constant terrifying reminder of horrors long-past.

As my dementia worsens and I continue to observe my decline with what is hopefully at least an engineers’ objective eye, I understand things in a whole new way. It is not as if I have any secret font of knowledge available to me that is not open to anyone else willing to look or listen, it's that I have been forced to re-examine life-long assumptions about the many aspects of dementia with which I find myself contending on a daily basis.

Or to put it plainly, to throw out the bullshit about dementia I thought I “knew” all of my life.

This story only concerns one of those “A-Ha!” moments, when I realized what I thought I knew about memory was not just wrong but wrong-headed. I have no problem stating that as I am merely a product of generations of “rural wisdom”, to be as kind as I can be at this point.

Until now I considered memories as mere facts and figures, data to be retrieved when needed. I “remembered” my first beer with the same sense that I “remembered” how to do a quick-sort in C. The memories seem to be divided into short and long-term parking and of late, the short-term parking seems non-existent. The longer-term, older memories seemed to have more staying power. That was it though, they were there or not, like records in a database. Sure sometimes my retrieval algorithm soils itself and retrieves the wrong results or my internal SQL gets so badly mangled that the query never finishes execution.

Like the bugs in crappy software, its a bug I have learned to live with. As any engineer worth his or her salt will tell you, the key to solving any problem is to truly understand the dynamics of it in the first place. If you go into troubleshooting with preconceived notions, you are most likely to fail. This isn't an opinion, this is real-life talking here. Recent events have demonstrated to me that once again, my understanding of my own problem was full of shit.

What led to this was a recent morning I awoke to find myself in my own home but the stuff on the shelves wasn’t mine; I recognised none of it. I liked the stuff I saw, in fact at the time I stated that it felt as if I were in a store that stocked nothing but cool stuff I would like to see in my own home. The weird thing (as if it needed to get stranger) was that even though I could not recall any details of any given item, I could feel a very strong (emotional as I later found out) sense that I knew that object or thing very very well...yet I could tell you nothing of it, not the name, the purpose, where it came from, nothing. But in my soul I “knew” it like the back of my hand.

Over several hours my memory came back, kind of in layers for lack of better description and with that clarity came intrigue: how the hell can one part of the brain recall something another part cannot?  I don’t buy into the whole heart/soul thing, it's all the brain on one level or another, your heart doesn’t think any more than your butt does. Which might explain politicians but that's another story for another time.
My limited research has turned up that the brain has a left and a right side to it, the left side being more logical, analytical in function and the right-side being in charge of stuff like arts, music, the softer, emotional side of thinking. And therein lies the clue:

Every memory above a certain level or class (say, whats for dinner?) has a duality to it, an emotional component as well as a “data” component. Consider the data “data and the other part “biological metadata”. So when the brain encounters physical damage as it does with the sources of dementia, the damage is pretty random in nature; I equate this to a shot-gun blast to the brain, if the pellets were protein deposits.

What fascinated me was the idea of how little the randomness of the damage could be changed and how vast an impact the patient-effects were...and it also answered many questions in my mind about the genesis of the many LBD symptoms I contend with daily. One is worsening reliability of memory retrieval and the other is growing senses of apathy in unpredictable areas. Now I see they are two sides of the same coin.

If there is damage to either side, the memory or fact can become “unmoored”; a “dangling pointer” in C-programmer-ese.  Unmoored or unanchored memories form that fuzzy gray area of stuff we can only seem to see out of the peripheral vision of our minds’ eye.

If the damage happens on the left-side or “data”-centric side as I think of it, you can be left in a state I was in where I had definite and strong emotional ties to things but had no data to go with them….it left me in a state of cherishing things I didn’t really know.

This so totally explains the puzzle I have worked on since almost day-one where when I feel I have been hurt, cheated or offended by someone I reach to the hacker box of tools for justice...and that toolbox always offers a pretty large buffet of enemy-buggery to choose from. The problem since the dementia got worse is I can’t seem to prioritize solutions. By that I mean, if say a person cheats me out of (say) $100, I might have two solutions in my toolbox, one is to hack their social media accounts to cause shame and mayhem there; another is to inject loads of child-porn into their accounts, get the police after them for any number of things, ruin their credit to the point their family is living in a cardboard box in one of Las Vegas’ many tunnels….you get the idea. I can’t see any difference between a “reprimand” and a scorched-earth solution to any problem; they both seem viable and to accomplish the goal of making the bad-guy stop.

The thing is I could see that in myself, knew it was messed up, abhorrent behavior that it was...and in so doing would often simply make no choice at all. Many miscreants escaped varying levels of my justice thanks to that final flash of common sense. I could see that under any other circumstances I would not think for a moment to unleash such overkill on a target, the fact that this option seemed rational shocked me out of my reverie.

I never understood what could break in my head where I could plot out technical solutions so well and still totally lose what I thought of then as “common sense” or “appropriateness of solution for a given problem.” Now I know; when I go to retrieve the list of solutions for justice, there is no emotional bit there to provide the contextual clue that “yes this asshole ran me off the road but no his family doesn't deserve to live in a cardboard box and lose everything because of it.” It is simply a list of options to choose from, one no better or worse than the other. Risk is another side of that missing, the sense that YES I can do a thing but there is intense risk involved so caution may be in order. That's not there so again, solutions are indeed ideas flying without a net.

I get that even in my own understanding of this, it is totally a research project of my own mind, the validity of which exists nowhere else. I wish it were different but I am fine with that; my own mind is the only reality I need to contend with for the rest of my days anyways.

However the engineer in my DNA is screaming the old adage “Never list a problem without at least proposing a solution as well.”  Sadly w/o help my suggestions can be little more than ideas for more research or just plain questions we ask ourselves to learn which questions that are really the important ones….for better or worse, here is what I have:

Just some thoughts rattling about in my head.
Jeff Cobb
Vegas 2020