For Trump, the end started at the beginning. 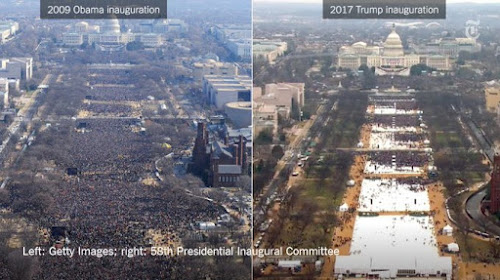 So here we are, after almost four years of Trump and now, Trump seriously needs us to believe him when he claims he never disparaged dead US soldiers, the corona virus is going away, he has nothing to hide, he is the only one who can save us from anarchy, the plague, windmills and other horrific shit.

The problem for Trump is, he started all this with a lie. It was a lie about shit he didn't even need to lie about yet he did and when it blew up in his face, he doubled-down on a lie so lame it took 10 seconds at Google to prove his ass wrong.

Donald Trump needs people like me to believe what he is saying at a time like this, his last chance to make a difference.  Yet I cannot escape the idea that if he will so forcefully lie about inconsequential things like his crowd size, he is  willing and capable to lie about anything and everything.

Thus his denials of dissing my fellow soldiers and veterans fall flat. His claims everything is getting better you must assume are the opposite of true.

The messed up part is I remember Trump thinking it was funny as hell to lie to reporters and the American public, back in 2017 he thought that shit was great. They and by extension, the American public were aghast that he would so willingly do so when some day he might need someone to believe him...you know, in the case of say an emergency or going to war or even appropriating money for disasters. He just cannot be trusted and has no credibility.

It's just that damned simple.