On Jan 6, 2021 Insurrectionists attempted to take over the US Capitol. Everyone there seemed to have a story but one particular group has no excuse at all. I am looking at you Pissedofer Pooney. 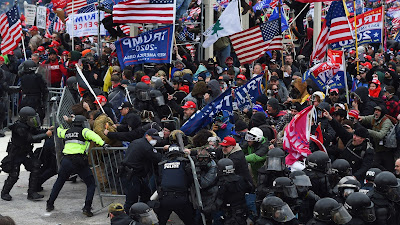 The heinous events of January 6th were simply inexcusable. Most of the terrorists attacking the US Capitol did so out of apparently invincible stupidity, happily believing lies told by Trump and his Republican criminal associates. These morons did this claiming some form of patriotism as I have never seen it defined; (attack your own country? Seriously dudes and dudettes, what the fuck were you thinking? Did you think there was ANY way you would not get busted and sent to jail? Did you actually say to yourself "yes I am taking over the country, to hell with the laws and to hell with every other American and this is a good thing." Some I heard even looked forward to how their grandkids would view them for years to come. Just remember orange is the new black they say.

But there is a group of terrorists for whom I hold special loathing. Two classes of individuals that had no fucking business there: off duty cops and active duty soldiers and veterans. As a veteran myself I can pretty much assure the readers that any soldiers that were there (I don't care if you claim to participate or not, you were there and participating in the crimes of the day. Own it.) broke their oath, broke the faith as we used to say in the Army in the 70s. We, each and every one of us took the oath, we raised our hands and solemnly swore to defend this country from all enemies, foreign and domestic. None of you have been released from that oath yet you chose not just ignore but to actually become those enemies that you swore to defend this county against? As far as this vet is concerned, any vets there should lose their benefits for life, charged and convicted of federal crimes so they can never vote again. Any active duty military should NOT be kicked out, they need to spend the next ten years at Leavenworth military prison, where the Army puts all of the real pieces of shit in their ranks. It's not the patriots or good guys that end up there, mostly simple-minded individuals that forgot that the oath wasn't to protect themselves or their rights, the oath is to protect this country, which police and veterans attacked.

Note I am not saying all cops or vets or bad, that would be stupid. I am stating flatly however that any cop or soldier that was there, "participating" or not, no longer deserve the respect and honor that comes with those jobs. You lost it for good. What I will say is that any cop that was there and did not stop, hinder or arrest the terrorists are in league with the terrorists themselves and is not to be in a position of public trust. I seem them as little better than Timothy McVeigh who also like to fuck up federal buildings. There is no excuse for your actions, you damned-well know it and thats what makes it so bad, you wrapping yourself in the flag patriotism when the other 99% of the country knows you are a no good insurrectionist at best and terrorist at worst. Can't help but notice that its the self-proclaimed patriots that are causing most of the pain, misery, destruction and strife in this country. You love to point the fingers but you are the most violent and lawless group in America today.

On the upside the way these people congregate, it won't take long to thin out their ranks due to covid deaths. Only wish hard working tax payers didn't have to pay for their care over a "hoax."

At this point you are not patriots or veterans or even citizens. Your just a piece of crap on the sidewalk now.

However the other class of shithead are all of the off-duty cops there that pretended ignorance at what was happening. To a one, including the Las Vegas's very own fart-knocker "Officer" Pissedofer Pooney.

Editorial Note: I was cautioned against using the actual Las Vegas cops' name because of potential retaliation so as not to shine too much of a light directly upon the miscreant passing himself off as police, for the purposes of this blog he shall be known as..Pissedofer Pooney. I suspect "Pooney" here will have his hands full for some time to come, possibly haunting the unemployment line. Good luck with that and getting hired after anyone learns why you need a job.

Pooney, you and everyone like you claiming ignorance of what was happening (I didn't do nothin, officer, I was just standing around looking, or worse the ones that tried to claim oh the door was open so I guess it was OK to come in and trespass) if you truly believe the bullshit you are shoveling, you are too stupid and unaware of the law to wear a badge, let alone have ANY authority.  In point of fact if I see a cop I am generally respectful but if I ever see ANY of the cops that showed up at the riot and then try to pretend to be police, I will have no other option than to assume you are still the terrorist you were on January 6th and as someone who DOES respect the oath they took, you will be taken down and arrested. You have less American than Osama bin Laden.

Nice going shitheads, one and all.